by Curlz
oh my gosh! *searching for a way to get to Australia to get some*

And it is still astonishing how far they have develop. Great!

by kuza
They look so big now!

by Careyenz
They are really adorable. I can't get over how sweet their little faces are. I so wish I could get Aussies! You're an inspiration, Nat!


Sent from my iPad using Tapatalk

by Nat_addicted to HC's
17 little Crabs out today

so I hatched a plan to catch them so I could show you the difference in sizes better but they are so quick & its a race once I lift the lid can I catch him/her before they make it to a tunnel or the coconut hut & disappear?!?!
I caught 16 lol

I chose a ceramic dish (warmed) to put them in for pics as I figured they would be unable to escape simultaneously, unfortunately all flash pics were a fail & they did not stay still!

by fraksocks
That one is still so tiny in comparison to the rest! How old are they now? And what is the size range of shells that they are in out of curiosity (obviously very, very small lol)

by Curlz
*wo* 16 little sweeties

same here. Some took big shells, some stayed in tiny shells. At the moment there is only one still in a tiny shell.

by aussieJJDude
Wow, so of them look huge, but I bet they not big at all!

by kuza
so awesome!

by SoulLonely
wow, how adorable! It's very interesting to see all the different sizes even though they are the same age!

by Careyenz
That is about the sweetest thing I've ever seen!

by Nat_addicted to HC's
I started moving the Juveniles to the growing tat on the 23/09/13 and to date I have moved 16
the 3' tat proved to be difficult to stabalise as I didn't want to have a drastic temp & humidity change that could be fatal. I ended up using a 38 watt microclimate heat mat on the rear and a 14w on one end to get the temp up to high enough (28-32 degrees celcius) with insulation.
I have gone with the EE/Sand/Worm castings sub in the ratio of 1(EE):5 Sand/Worm castings dampened with marine grade salt water. sub temp is a consistent 23 degrees, Humidity is in the low 80's
The transition tank is still running and will be for sometime as molters could still be down (fingers crossed that more have made it!) they are still cannibalistic even with an abundant food source, I have watched them eat each other (dig up and eat a molter right next to the full food dish) while trying to get the 3' tat stable, overcrowding I am sure was the main issue here.
Shell shopping happens on mass, just the sound of a crab in the shell shop brings others running with eager anticipation.
Determining gender has proven to be futile! they are way to fast and feisty to get a decent look

I did not want to overly stress them more than necessary.
There is a remarkable size difference between crabs. 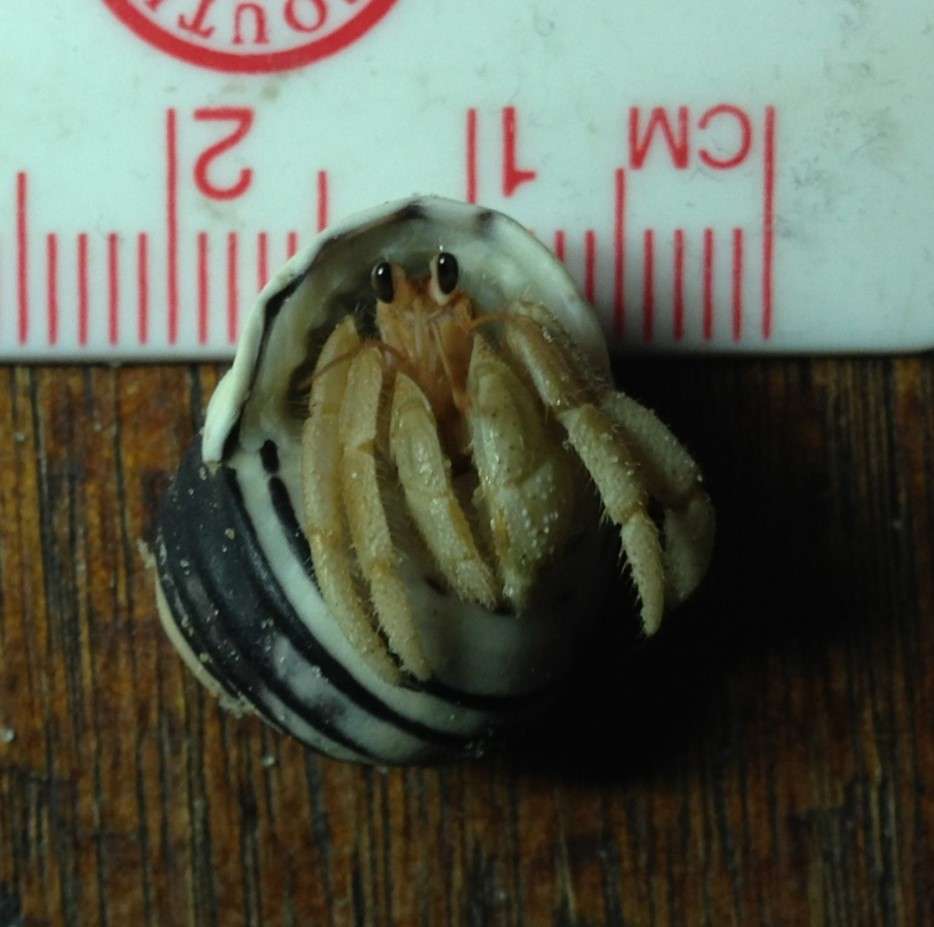 out of more than 50 photos this one was the least blurry, they are not photogenic

by kuza
I'm glad they are doing so well and growing so much! That guy is super cute!

by wodesorel
Wow, I would have thought once they were above ground and able to access food they would stop being so cannibalistic.

It's almost hard to believe that their biggest enemy in the wild is probably their sibling. Gotta say, it makes me wonder why as that's no way to guarantee that a species survives.

I am very much hoping that you find more, too!!

They are extremely cute.

by Rocky
I can't believe how cute and sweet they are!

It's not just the shells! Their bodies have such a crazy size difference. Shows what we know about putting an age to crabs. You wouldn't be able to get side-by-sides would you?
All times are UTC-05:00
Page 30 of 35
Powered by phpBB® Forum Software © phpBB Limited
https://www.phpbb.com/