What was aggression is now fear..

Please post here if you are a new crab owner and someone will be along shortly to welcome you to the HCA! This is also the place to welcome new crabbies to your clan!
Post Reply
5 posts • Page 1 of 1

What was aggression is now fear..

So I got two new crabs and upon introducing them to my iso, they almost immediately got in a fight. I watched the bigger of the two reach out and try to snap something off the smaller one with his claw. I could actually hear the claw click shut. Luckily the smaller one was fast enough to dodge it. It happened a lot faster than I've seen hermit crabs move before. I thought this was odd since they came from the same place, but I went ahead and dunked them both in the dechlorinated fresh water since a lot of people say that helps with introducing new crabs to existing crabs.. well the aggression towards each other stopped. But now they are terrified. Their personalities changed completely. They were daytime (morning/evening) active and had no issue when people walked by the tank. Now (in my main tank) they hide in the coconut huts all day and won't come out until all the lights are off and no one is around. If I happen. To go past them after they have come out in the dark. I'll see them take off and hide and they won't come back out for hours.
Is there anything recommended for reducing their fear of people? I'm not looking to hold them, I just want them to feel comfortable as I move around outside their tank. It's in an area I walk past a lot so I'd hate to be interrupting them trying to eat/drink/climb/etc. Just because I walk past. And I can't move the tank. Tiny apartment = limited space.

IMO they might just be stressed from being dipped in the fw, mine were the same (w/o the fighting) at first too. After a while they will get used to their surroundings:) However, I'm not completely sure so I would wait for someone more experienced to reply in case something really is wrong.
Top

Hi there! Do you have a lot of hiding spaces for them?

When you say they were really active before do you mean your previous crabs or the new crabs?
Truly blessed to have incredible creatures, wonderful friends and my amazing family in my life!! I'm very thankful & grateful for all of them! www.thehealthyhermit.com
Top

Yes plenty of hiding space. Two coconut halves with doorways, with an egg crate/plastic canvas second level over them so even on top of the cononuts is a shaded hide. Plus a tension rod/reptile hammock third level with a reptile vine woven around it for hiding.

And the new crabs. I simply meant that at the pet store (yes I'm bad for buying instead of adopting, but there weren't any ads for adoption close to me and I didn't want to travel far because of Covid) and the first few minutes after I brought them home they showed little to no fear of people walking past the tank and would be out and about. Then the fight happened, followed by the dip, then they were scared to death of anyone walking past the iso tank, which the iso tank admittedly didn't have good hides. Shortly after switching to the main tank they disappeared. Only to be seen during the night if I snuck out. But the moment they saw me they would disappear for hours. I realize the hiding to an extent is normal, I more than anything just felt bad because I felt like I scared them.

On a brighter note, the day after both of them buried for what I assume is molting, my two molters that were down for 8+ weeks came up and look very healthy. 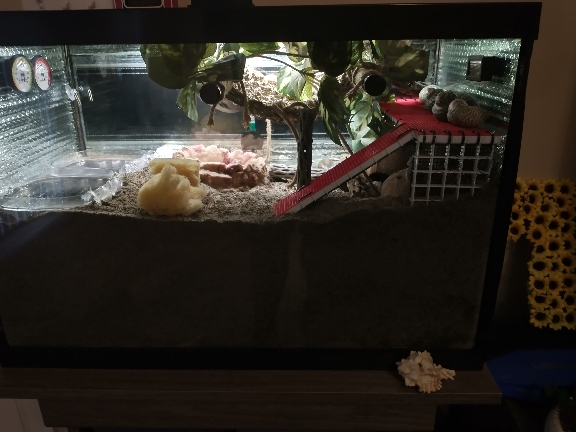 Beautiful tank! However, you really don't have a lot of hiding spaces spread out. If you offer more places for them to hide throughout your tank you will see them out more. There is a lot of open space on the lower level. Hermit crabs are considered prey animals.

Artificial plants, move a coconut hut out or purchase more. They like to be covered.

If they feel safe in their environment they will be out all of the time.

Also - I highly recommend that you get them a plastic hamster wheel. Hermit crabs walk for miles in the wild.

I love the kaytee silent spinner

Truly blessed to have incredible creatures, wonderful friends and my amazing family in my life!! I'm very thankful & grateful for all of them! www.thehealthyhermit.com
Top
Post Reply
5 posts • Page 1 of 1