Please post here if you are a new crab owner and someone will be along shortly to welcome you to the HCA! This is also the place to welcome new crabbies to your clan!
Post Reply
4 posts • Page 1 of 1 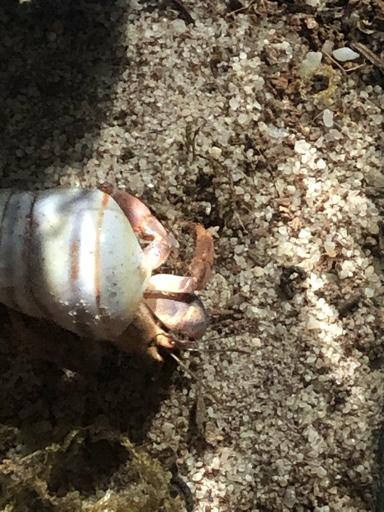 So I ended up with hermit crabs from someone gifting one to my daughter. As soon as he was brought home in the awful little plastic carrier he came in I knew that I had to find something better for him. I went to a locally owned pet store and to their credit the young man working gave halfway decent advice about it and I left with a 10 gallon tank and some EE bricks and another hermit crab so the one we had could have a friend.

I later researched more and added play sand to the EE and a glass lid after agonizing about the humidity and more things to climb when the one we got disappeared! I found the HCA after that and realized he was molting and resisted digging for him and he popped back up a month later looking wonderful!

I upgraded my tank to a 40 gallon breeder and added one more little guy that was a complete pity purchase from Petco. He was not in the worse conditions there but in a painted shell that was way too small for him. I brought him home and put him in iso and he switched shells almost immediately (somewhere along the line I had gone on a shopping spree from Richards and got waaay too many shells) Eventually moved him to the big tank where he promptly disappeared and he just popped up this evening after about a month looking perky and exploring like crazy. This is him in the picture below. The other friend we got is down for his first molt. Just wanted to introduce myself and thank everyone here for all the amazing advice I have gotten!

Welcome! Glad you decided to make a post!
"If there are no dogs in Heaven, then when I die I want to go where they went." -Will Rogers
Top

Good for you! And welcome