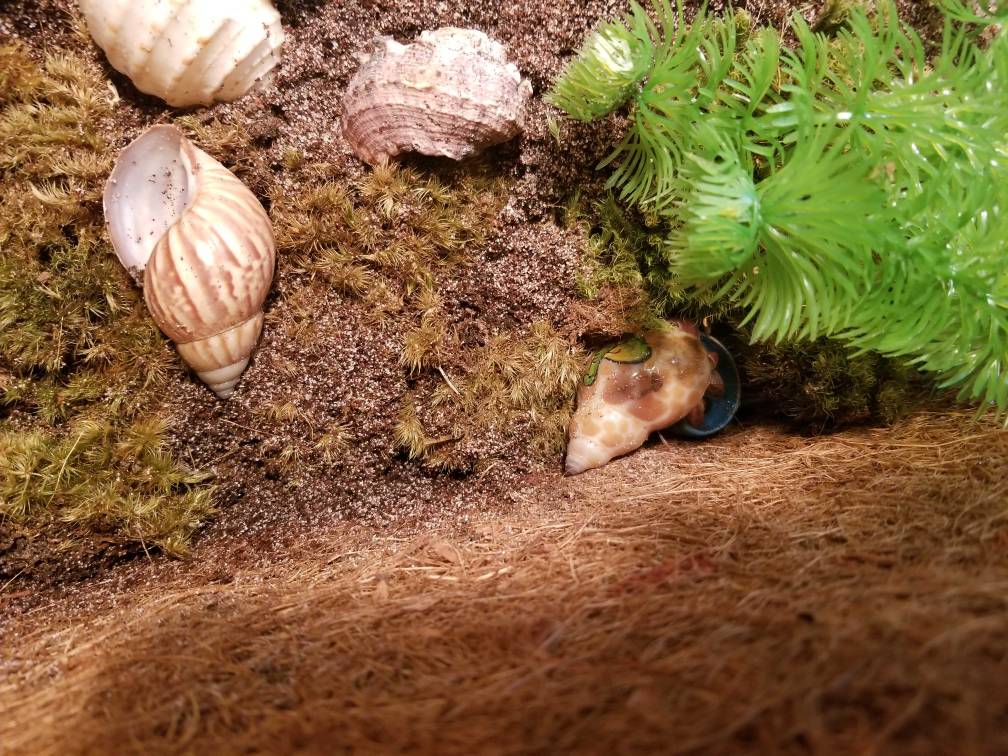 by SLEPTAS
I moved them apart and he is definatly naked 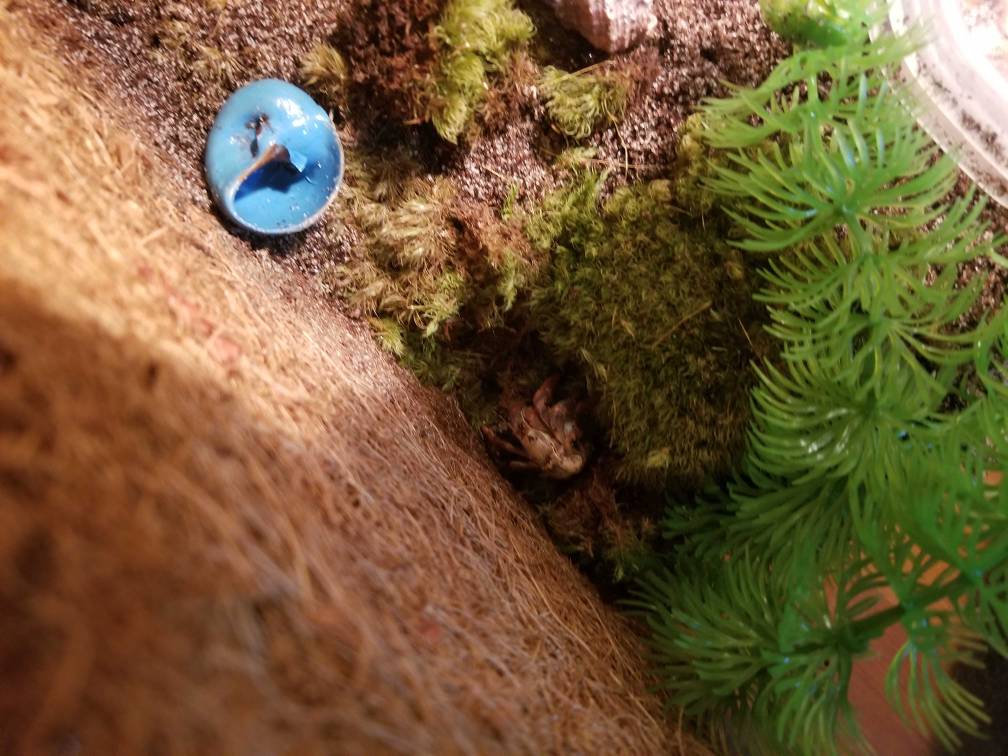 by SLEPTAS
Idk if this an emergency or not. Neither is hurt but why is he hanging out naked

SLEPTAS wrote:Idk if this an emergency or not. Neither is hurt but why is he hanging out naked

Yes. It is an emergency. He should be reshelled as quickly as possible. As long as you have extra shells remove that painted shell. Fill in the emergency template so we know what your tank conditions are.

by SLEPTAS
What type of substrate and how deep?

I have a mixture of pool filter sand and ecoearch and a little bit of calcium sand. It's just barely under 6 inches.

I have my gauges right above the substrate attached to the glass. Both are normally around 75 but just today i moved to a bigger tank so the heat is still at 75 but I'm working on getting humidity under control until my bubbler gets here.

I dont have a great heat source but it keeps the tank at an okay temperature. I have a room heater next to the tank and a heat lamp that I turn on if I think it's getting too cold. I would leave it on longer but it drys out the tank. I'm not sure how else to heat a 120 gallon...

Right now I have dechlorinated water that I got from the store meant for betas until my prime gets here. The salt water was also from a bottle meant for hermit crabs until my instant ocean gets here. (I just bought a lot of stuff for the hermit crabs)

I have egg shells, fruit mix from zoomed, and meal worms. I replace them every couple of days even though it doesnt look like they've eaten much but one time it got moldy when I waited so I dont do that anymore

How long have you had the crab and what species is it, if known?

I have 3 purple pinchers that I've had since early November this year.

Has your crab molted, and how long ago did it happen?

Not yet but i finally got them all to change out of their paint shells as of today which is part of the emergency.


What type of housing are the crabs kept in, what size is it and what kind of lid is on the housing?

I just moved them to a 120 gallon tank today. Until I get more supplies I'm only using half the tank right now. The tank didnt come with a lid so I have a plastic wrap makeshift cover right now.

How many crabs are in the tank and about how large are they?

I have 3 crabs. 2 are small one is large

How many extra shells are usually kept in the tank, if any?

Have there been any fumes or chemicals near the crabitat recently?

None that I know of but I did clean out the new tank with bathroom bleach cleaner (forgot the real name of it) but I made sure it didnt smell or anything by the time I was done.

How often do you clean the tank and how?

I change out food every couple days. Change water every other week or if it's super dirty, I havent had the crab long enough to do a deep clean.

Are sponges used in the water dish? If so, how are they cleaned?

No sponges I do have some shells in the water so they can climb out but that's it.

Has anything new been added to your crabitat recently?

Nope but I would like to change that once i get everything set up.

Is there any other information you would like to share that might be helpful (anything that is regularly part of your crab care, playtime, bathing, etc.)?

Not that I can think of at the moment

Alright I have 3 crabs. My biggest causes no problems and the other 2 never have before, they usually get along perfectly. But my smallest crab (george) changed when I put him in the new tank. Normally hes super shy around me and is either always buried or in his shell but now (as of today) he is super active and has been climbing and running everywhere and didnt hide when he saw me. The other 2 looked around the new tank and then found their camping spot, the big ones completely buried but as my blue (crustle) one was burying himself george came and looked like he was trying to dig on top of Crustle. At first I was like heck are they mating? But then I saw the blue shell turn upwards and it was empty and crustle was hiding under the moss. When I saw that I moved george away and took the blue shell out, I've been trying to get him out of the painted shell forever. But he kind just stayed down there naked. I watched and made sure the other crabs wouldn't come near and i put 2 shells close by that were about his size.

by curlysister
Has he gone back into a shell yet? He needs to be re-shelled ASAP. You can put him in a bowl with just a very small amount of dechlorinated water in the bottom (like 1-2mm), along with a couple of shells his size. If he doesn't go into a shell on his own, you will need to gently uncurl his abdomen and put him into a shell.

Calcium sand is NOT safe for crabs. I think I saw somewhere that pool filter sand is? I am not familiar with it though. Play sand is cheap and totally safe, so that's what most of us mix with the Eco Earth in a 5 to 1 ratio. Substrate needs to be at least 6 inches, or 3 times as deep as your largest crab, whichever is deeper.
HCA recommends at least 3-5 extra shells per crab.
Prime to treat the water and Instant Ocean are definately needed instead of what you are currently using.
Check out the 'food and water' section for hermit crab nutrition. Your crabs probably need more variety, protein, and calcium.
To heat your tank, you will probably need a couple of under tank heaters, mounted on the sides or back of the tank.

by SLEPTAS
He went into one of the shell I put near him and my other crab changed shells as well. For the water and shells I am in the process of getting some but shipping takes forever this time of year. The calcium sand I have is only on my very bottom layer that's like a quarter inch think. The substrate section did say pool filter sand was safe. I'd say I have it at a 3:1 sand to eco earth ration
All times are UTC-05:00
Page 1 of 1
Powered by phpBB® Forum Software © phpBB Limited
https://www.phpbb.com/