For topics relating to crab care that do not fit into the other categories.
Post Reply
50 posts

Kydra wrote:
Hey, was up late stressing about the crabs lol. Finally feeling better, but still not 100%... heading to work... or at least trying to get ready to head back in today. Feels like I have been sick and just resting for way too long now. My results did come back negative, thankfully! Thanks for asking.

I personally prefer the tank on the floor and had help with the tank hence why I now have a 55G, but it is a new tank. Have a spot in my room that has really no traffic (I am rarely in there myself and the placement is ideal and no issue with the floor itself holding 500lb+ esp in the chosen location). I was offered help with getting a stand which started all of this rolling in my head and every stand from 100-300 or so had many poor reviews and reviewers having to reinforce the stand to hold the weight which kinda defeats the purpose of paying the money for it in my opinion. Of course that price range isn't going to result in some amazingly well built stand.

I am completely fine with the floor and having to mess around with the crabitat once complete... oddly, I would prefer it there lol. There shouldn't be an issue with getting a stand later as, again, within this price range or so one was offered to me. I had planned on just cutting the cardboard from the packaging to leave under the tank then directly on the floor. Should I use the cardboard or a mat of some sort? Better to just place directly on the carpet? It's an Aqueon 55G so not a show tank that was extremely expensive, but am still thankful to finally have something after so long talking about upgrading!

The crabs will be much happier once I get this all figured out! Thanks again and if anybody else has any thoughts please chime in; would be appreciated.

Glad to hear you're feeling better!

I had Lyme Disease at 15 years old, so my joints tend to object to me doing a lot of bending and twisting lol. But since you're ok with the tank on the floor, I'd say go for it. If you want to protect the carpet from marks, you could put a yoga mat or something similar underneath to help.

Congrats on the new tank! I totally get not wanting to spend money on a stand too. I just happen to have mine that I bought when I got the tank for free and used the aquarium for fish.

Make sure to post pics whenever you finish your upgrade. Stay well!

Yep... I ended up setting it up on floor today... and wow... just finishing up trying not to stress the crabs too much so leaving it as is for now. Will make some changes as I have time. Pic from today posted below.

After slowly emptying most out of the 20G long, I finally had just ran out of time and scattered shells around after a quick rinse (ordered more shells from naples) then moved the two that are up into the 55G.

I still have two molting in the 20G... I left a small hide, some dried food, cuttlebone, and the shallower water containers that I already had in there. I tried making 'lines' in the sand to monitor any activity as I'm using the wyze cam on the 55G for now. Missed my window when all four were up, but, yeah, I FINALLY upgraded from the 20G! Now I just wait for the other two then can take the 20G down.

Also, apologize for kinda hijacking the Petco sale thread just figured after everything written here that I'd post the upgrade pic here.

(Note: The substrate probably is going to look like there's a color change towards the bottom and maybe on side, but just shadows. It's mixed evenly and moved crabs in when humidity/temp basically hit 80/80.) 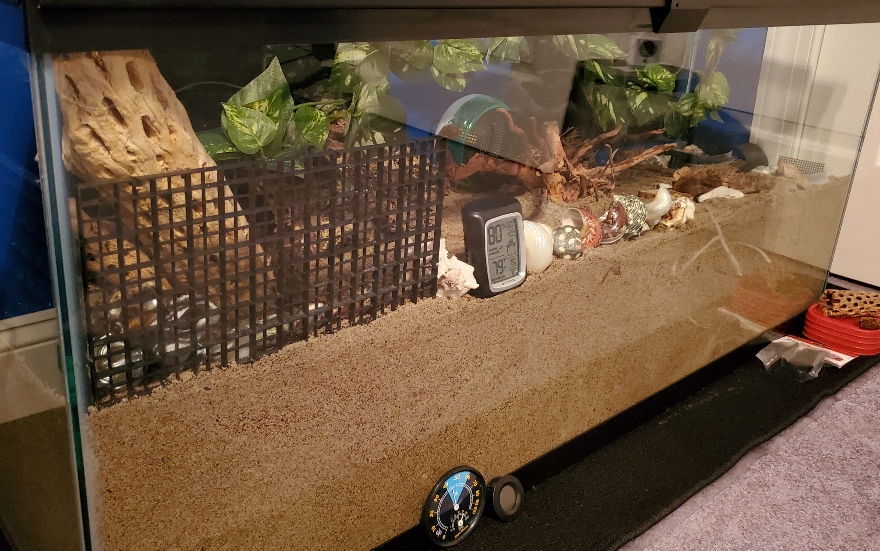 Sent from my SM-G975U1 using Tapatalk

Sorry... 1 more picture. I set the wyze cam on an upside down trash can temporarily to make sure all is well tonight.

I previously setup a smaller sized hamster wheel for the crabs (smaller crabs and thought would fit in smaller tank, but I'm generous with the sub) so I just added that in while I finish the larger wheel and after I just posted I see the larger crab just spinning and spinning. Yeah, he's still spinning. Feeling like I've deprived them of proper exercise now. Going on at least 20 minutes of spinning in there nonstop lol.

There is a new large log with hole in it visible and second coco hut cave that's not visible and larger than the other in the back left corner (just looked at pics and seems like there isn't much hiding space, but there is).

Just thought was worth sharing as I was initially pretty excited to get the wheel in the 20G long which just never fit right thought I'd give that a try before finishing the larger wheel. Seems to be enjoying it; at least initially!

Edit: OK. He is STILL going nonstop been over an hour now. Is he just exercising? Does he think will eventually get somewhere else? Lol.

Thanks again for all of the help/feedback!

Just to finish up here... my larger crab was STILL going in wheel at bed around 2AM last night. I woke up today to find my smaller crab actually sleeping in the wheel so have no idea what went on after 2AM.

All of my four crabs are gone during the day whether in hides in small holes they dug or just missing until night. Have never seen them during the day until this morning. Initially was worried thinking possibly stressed, etc.

Just getting home from work around 2AM tonight and tried my best to finish the larger hamster wheel before leaving, but I'm super cautious and didn't have time to file down the zip ties (they seemed too sharp). So just finished after using my mother's nail filer and have both hamster wheels in tank.

Noticed while at work that both were in the smaller wheel at one point and basically 'fighting' over dibs on it lol. So just turned off light and back downstairs; the smaller crab already going on one of the wheels again... this is hours at a time!

Anyway, I did want to share further as with 4 crabs I wasn't comfortable with the 20G long R/T space as I felt bad imagining these guys actually wandering for miles in freedom and just stuck climbing up and down the same 6" log all night (also was worried about molting room).

I really can't believe that both have just immediately went to the wheel and both for hours on end. I really do kinda feel bad about less exercise options previously and I'm mostly writing to just recommended a hamster wheel. I know I'm basing this off of two nights in the new 55G, but wow what a shocker... at least to me. Thought maybe they'd figure it out after a few weeks and try, but instant.

If anyone is interested, the smaller wheel COULD have fit in the 20G long, but I added more sub and was hesitant to remove some other things in there, but I can go back and look at my Amazon orders and find the links.

Both are as easy as can be and placed directly on substrate (I am not all that creative and don't really do too much myself lol). Would definitely recommend at least trying them; they are relatively inexpensive. Can't wait for my other two molters to come up!!! Will edit with links to both and post a screenshot for sizing visuals if anyone is interested. Screenshot below with links on the way...

Edit: Looks like they may have upgraded from the 'silent spinner' to another wheel, but here is the link which includes both the mini and regular (you can see both in the screenshot below). Still available though from Amazon if interested.

Everything looks great! An upgrade is always super exciting. I'm so glad you finally found the time to make it happen. Life can certainly get in the way of all the things we want to do!

Don't feel bad about not having the wheel. I didn't know how much they would enjoy it either until I found the HCA. I had the mini silent spinner in my 20 gal L tank (4.5"). I added that and a 6.5" wheel for my biggest crabby.

Food for thought, and one of my favorite quotes by Maya Angelou:

"I did then what I knew how to do. Now that I know better, I do better".