For presenting do-it-yourself projects for your crabitat and for discussing and displaying custom built crabitats. Also for questions and reviews on equipment and products. *Stores and their reviews now have their own section in Classifieds*
Post Reply
31 posts

Everyone on here has such great DIY ideas! It inspired me to try and make something for my crabbies. Last night I pulled out some jute twine I had in the junk drawer and used it to crochet a little climbing net. Now that I did that, I think tonight I'm going to crochet one that will span the entire length of the tank, and attach it higher up to the one I made already. This will give them a little bridge to hang out on. I'm using a large aquarium algae magnet to hold the current net in place.
Not sure how to attach a picture in a post. I tried hitting the insert file/pic button but it just inserts the words "[img]". Here's a link to a photo of my climber:
https://photos.app.goo.gl/SQHt4Y4NkC11Nkeb6 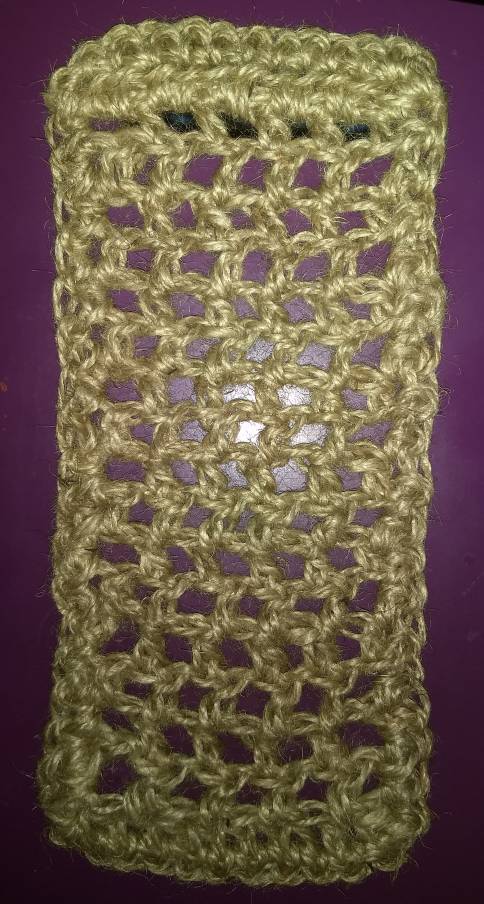 That looks amazing! Really like it, how does it look in the tank?

aussieJJDude wrote:That looks amazing! Really like it, how does it look in the tank?

Thank you! I think it looks pretty good. I forgot to account for the substrate, so the climber is a bit long, but that's ok. I just crocheted the bridge to match. Now I need to attach it to the climber.

Thanks to HCA, I adopted 2 crabbies yesterday, yay! Now my crab Beau has friends! They are in my glass aquarium with the climber. Of course Beau decided to molt this week, so he's still in his plastic terrarium until he comes up. But I think I'll move Beau to the aquarium when he's ready so he can have more climbing room. The plastic terrarium is wider but shorter, and only has about half of the climbing room.

Here is my crocheted crabby climber connected to my bridge. Both of my new little rescues buried themselves last night and I haven't seen them since. Who is going to test out my new climber and bridge now??? Lol. 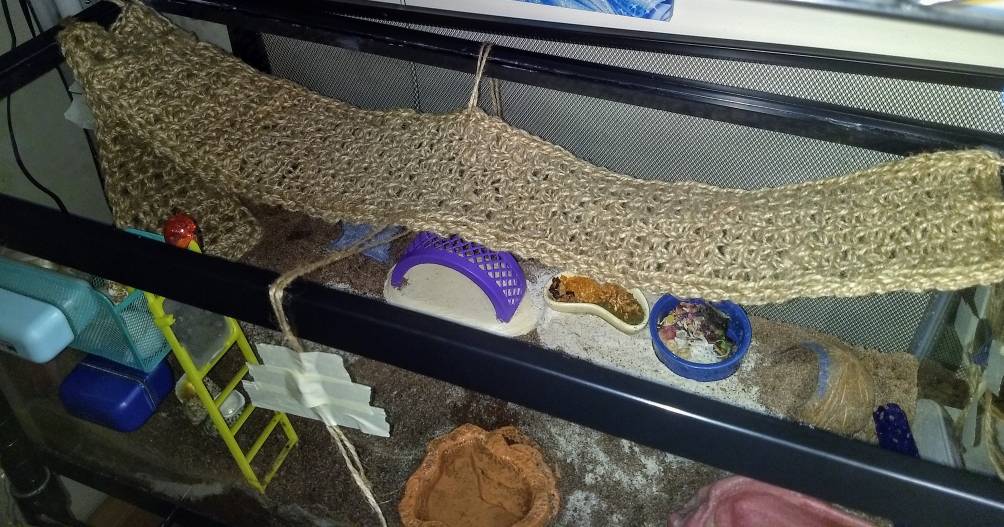 The crabby climber and bridge looks great to me, but from the photos I think it's too close to the lid. It's mounted on top, and then you close the lid, right? How do you secure the lid? If the lid is just put on top, likely crabs climb the "crabby climber" and push the lid away while they are exploring.
We had this happening with equipment being too close to the top*, and this happened also to others. So I suggest either moving it down so far that no crab can reach the lid while being on the "crabby climber", or secure the lid by e.g. placing a heavy object on the lid.

*We saw it on our nightvision camera footage. We had some driftwood in the tank, the driftwood reaching up to about 7 inches away from the tank lid. A gauge was fixed to the glass just above. A crab climbed the driftwood, stretched its body very long to reach up to the gauge, climbed the gauge, pushed open the lid. We found the escaper the following day.
On another occasion, one tried it using another way up, but we found him still inside the tank but already hanging from the top edge of the tank and tinkering around with the lid.
Crabitat conditions were optimal, so no reason to "flee" from that. But they are little explorers!
Top

My Mom said the same thing when I showed her the picture! I definitely don't want any escapees.

Even if I lower the bridge in the center, the edges will still be at the top where I attached each side, so I took your advice and put a heavy object on top of the lid. The lid is a reptile screen top. My crab Beau has always been in a large plastic terrarium with a tight fitting lid, so I didn't think about it with the screen top. I wouldn't want to wake up one morning with little crabby eyes staring at me in bed lol.

Thank you for your reply!

Not to hijack this from your awesome climber and bridge, but do you cover you lid with saran/ plastic wrap to hold the humidity in?
"If there are no dogs in Heaven, then when I die I want to go where they went." -Will Rogers
Top

curlysister wrote:Not to hijack this from your awesome climber and bridge, but do you cover you lid with saran/ plastic wrap to hold the humidity in?

I actually use a couple of 1 gal plastic zip lock bags taped to the top. I've used them for years on my plastic terrarium and it always seemed to work. So I'm trying it out on the screen top. My humidity levels are hovering around 80-84% in both tats. I just had the lid off to install the bridge and take a picture.

CrabbyLover77 wrote: ↑
Mon Aug 26, 2019 9:34 pm
My crab Beau has always been in a large plastic terrarium with a tight fitting lid, so I didn't think about it with the screen top. I wouldn't want to wake up one morning with little crabby eyes staring at me in bed lol.

There are two issues:
a) They not only push open screen tops, they push/slide open anything they can grab and that's not too heavy for them. I never used a screen top, but a sturdy plastic foil (like a "plastic glass", some 3 mm thick and hard on a terrarium of almost 1 meter length) on top and they pushed it open as long they were able to reach it.
b) A screen top won't hold the humidity. A quick fix is saran plastic wrap, a more durable one is getting sturdy plastic foil (some picture frames have that instead of a real glass) and use that. I, for example, bought such a picture frame and modified it for a lid. In your case, as you have a lid (but not a good one, as it's a screen top), you can put or even glue the thick plastic foil on top of the screen.
(EDIT: I saw you're using some plastic bags. If that holds the humidity, and you're fine with how it looks, that's fine. The only remaining issue is that they will really open the lid when something is that close to the lid and even hanging out from the tank! Mine would be out within hours for sure.)

I also had such a net/mat and I tried a few things to secure it to the tank.
a) Some thin wires, but they climbed them hanging from the wires like a sloth. With wires suspended from the upper tank frame, they came close to the lid and tried to explore a bit more than I trusted them... e.g. again made attempts to open the lid.
b) Suction cups. I got strong ones, but they were not holding the weight of multiple crabs on the net, and some crabs even tried to force them off the glass. After reinstalling them several times, I gave up.
c) Fixing the net to some branches, or even making poles from wood (just like a traditional hammock). Works well.
Top

Thanks so much for all of the suggestions. I know the plastic bags don't look attractive, but I'm ok with that. They seem to work well holding in the humidity.

I have an idea with the climber/bridge. I think I might disassemble the climber from the bridge, and put the climber sideways against the glass instead of longways toward the top. Have you seen those really strong algae scraper magnets used in aquariums? I have a couple of those that I haven't used in my aquarium since my snails have become an excellent algae cleanup crew. I could use those to secure the strings on the ends. This way nothing is hanging out of the tank, or pointing up toward the lid. I'll let you know how it works out.

I just disassembled the climber from the bridge, and took the bridge completely out. I took the climber and folded it in half longways. I was able to secure it to the longer side of the tank with the algae magnets. This will give them something to climb on without being too close to the top (still keeping a heavy object on the lid though). I ran short on substrate on Saturday when I brought the crabs home, but will add more to make 6" as soon as they newbies come up from molting. They went under to molt so fast I didn't even get 24 hours to get back out to the store to get more sand.

So I'll have to move the climber up a little bit once more sand goes in.