For presenting do-it-yourself projects for your crabitat and for discussing and displaying custom built crabitats. Also for questions and reviews on equipment and products. *Stores and their reviews now have their own section in Classifieds*
Post Reply
7 posts • Page 1 of 1

I currently have a suspended rope reptile hammock... the crabs love going up and down their ladder onto the hammock but sometimes i'll find one of the suction cups fell off the wall and one or both of the boys frazzled/on their back. It used to fall off less but the suction cup is getting old. I'm wondering what the best way to hang this might be. A new suction cup? has anyone had success with command hooks inside the tank or is it too humid
Top

I have had both good and bad luck with the command hooks. I figure with the ones that came off quickly, the glass might not have been dry enough or maybe a bit of sand was under it. But I've got a few that have stayed on for about a year now. For all I know one of them yanked it off. LOL

I have never had much luck with command hooks or suction cups. They hold for a month then two weeks, then a few days. We cleaned the glass with apple cider vinegar and dechlorinated fresh water and really scrubbed it. We even tried warming up the suction cups. Nothing worked for us and gave up. Trying to use either. Hopefully someone else has a better advice.
Coenobita Curiosities offering crabby decor
https://www.etsy.com/shop/CoenobitaCuriosities
Top

I had the same issue with mounting my climbing wall. I found that metal command hooks from a hardware store work much better than suction cups or plastic hooks from a dollar store. The hooks I have now have lasted a month so far and have not fallen off. Also, maybe use several hooks to hang your net in order to distribute the weight better?
Top

I use command hooks with no issue. They make humidity ones for hanging Christmas lights - use those. Clean the area really well with a dry paper towel. Apply JUST the command hook. Press hard. Let that command hook sit for a good 10 min before hanging anything from it.

I also use the command hooks with the velcro like 16lb picture hanging backs. Use the same way as above.
Truly blessed to have incredible creatures, wonderful friends and my amazing family in my life!! I'm very thankful & grateful for all of them! www.thehealthyhermit.com
Top

I just bought some outdoor command strips to try in the tank, but only time will tell. They're a bit more expensive than the others, but all of the reg command strips I used fell off after about 9 mos being in the tank.

There is one thing I've found that works incredibly well though - Cable Tie Mounts from any hardware store or Amazon. I don't know why I had them in the house initially, but I tried them and the best thing about them is that the egg crate I use snaps right onto them, plus they're cheap! I still zip tie them to the mounts for safety but they handle the humidity much better than the command strips. However, position it wrong and you'll need a razor blade to scrape it from the glass. They come in packs of 10 or 100, black or white, and they're 3/4", 1" and I've also seen 1.1". Maybe it's the 3M double stick foam adhesive that does the trick, but I love being able to zip tie anything and everything to them.

If you're tired of the stupid suction cups failing and other adhesive strips falling, it's worth a try! , 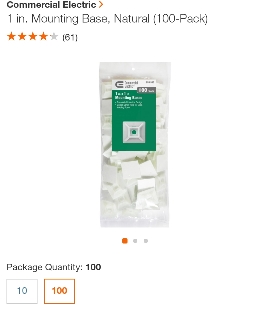 I tried suction cups. Larges ones. Could last a few hours or days. Pretty sure the crabs climbing on them pulled them down picking at edges of cups.
Craber since (december 2019)
5 pps, 1 successful molt 🥳
20 gallon long
Top
Post Reply
7 posts • Page 1 of 1