This is a forum dedicated to Hermit Crab Association members posting pictures of their crabs and crabitats.
Post Reply
5 posts • Page 1 of 1

So I'm pretty new here but I think its best to start with introducing my pet hermits. I currently have 3 hermit crabs which I have kept for about 2 years. My two hermit crabs I had bought I named Athens and Streaker, (my first two hermit crabs) and received them from a souvenir shop in South Padre, Texas. Athens was super shy and would never want to come out of his shell. I was super concerned since his health was my top priority. Sadly Streaker had passed away and I gave him a proper burial. I didn't want Athens to be alone so I had stopped at a local pet shop called Papa Jims.

They had a tank of maybe 5 hermit crabs. I didn't want a big hermit crab since at the time I had them in a small tank and didn't want to make them crowded. So I picked the smallest one in the tank. When I brought him to meet Athens. I gasped at the size difference. Apparently, the smallest one in the tank was extremely large. We called him Strider or Land Strider, he took up my whole palm. He also had the worst pinch, he left a small bruise on my hand for a week. We had moved them to a larger tank (5 gal), but still were trying to save up for a larger tank.

Sadly Strider had also passed away due to a failed molting. I was pretty devasted and needed to get Athens another tank buddy, I didn't want him to be alone. By this time also I had gotten them a new 10-gallon tank. I had also found out my little sister, who had a hermit crab pair, that one had died. So she gave me the other. We called him Tiny Boi, he was maybe an inch in size compared to Athens who was almost palm sized. I was scared at first because they were completely different sizes. I kept a close eye on the two, mostly because I didn't want Tiny Boi to become a tiny snack. After a week they had gotten along and chilled together.

However, Tiny Boi molted pretty often and I didn't want Athens to get lonely. So I had gone to Petco to buy Athens and Tiny Boi another tank buddy. I looked at all the hermit crabs aiming to find a small one, but not too small. I saw one wedged between a decoration they had, he was actually struggling to get out of the odd space. I decided I would adopt him. I'm 17 and you needed to be 18+ to adopt. However, the employee decided to let me go through with the paperwork since I was a high school student just buying a hermit crab. A little concerning but that's offtopic. Anyways I brought him home and carefully introduced them to Swirly Boi. After a week they enjoyed each other's presence. Meet my bois! 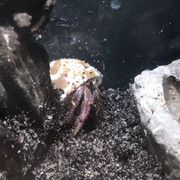 Cute crabs! Welcome to the board as well!

They are so cute! They look very happy and healthy.

Beautiful crabs! Welcome to the HCA!

Truly blessed to have incredible creatures, wonderful friends and my amazing family in my life!! I'm very thankful & grateful for all of them! www.thehealthyhermit.com
Top
Post Reply
5 posts • Page 1 of 1