For presenting do-it-yourself projects for your crabitat and for discussing and displaying custom built crabitats. Also for questions and reviews on equipment and products. *Stores and their reviews now have their own section in Classifieds*
Post Reply
9 posts • Page 1 of 1

I said I'd post the steps, but unfortunately I ended up with crabs earlier than expected and had to quickly build.

I went with a plastic tote (food grade of course, very important). It's a 50~55g tote leaning a bit on the taller side of things. I got my sand - I got WAY too much sand, but hey, more is better right? I also had coconut fiber to mix in with it. 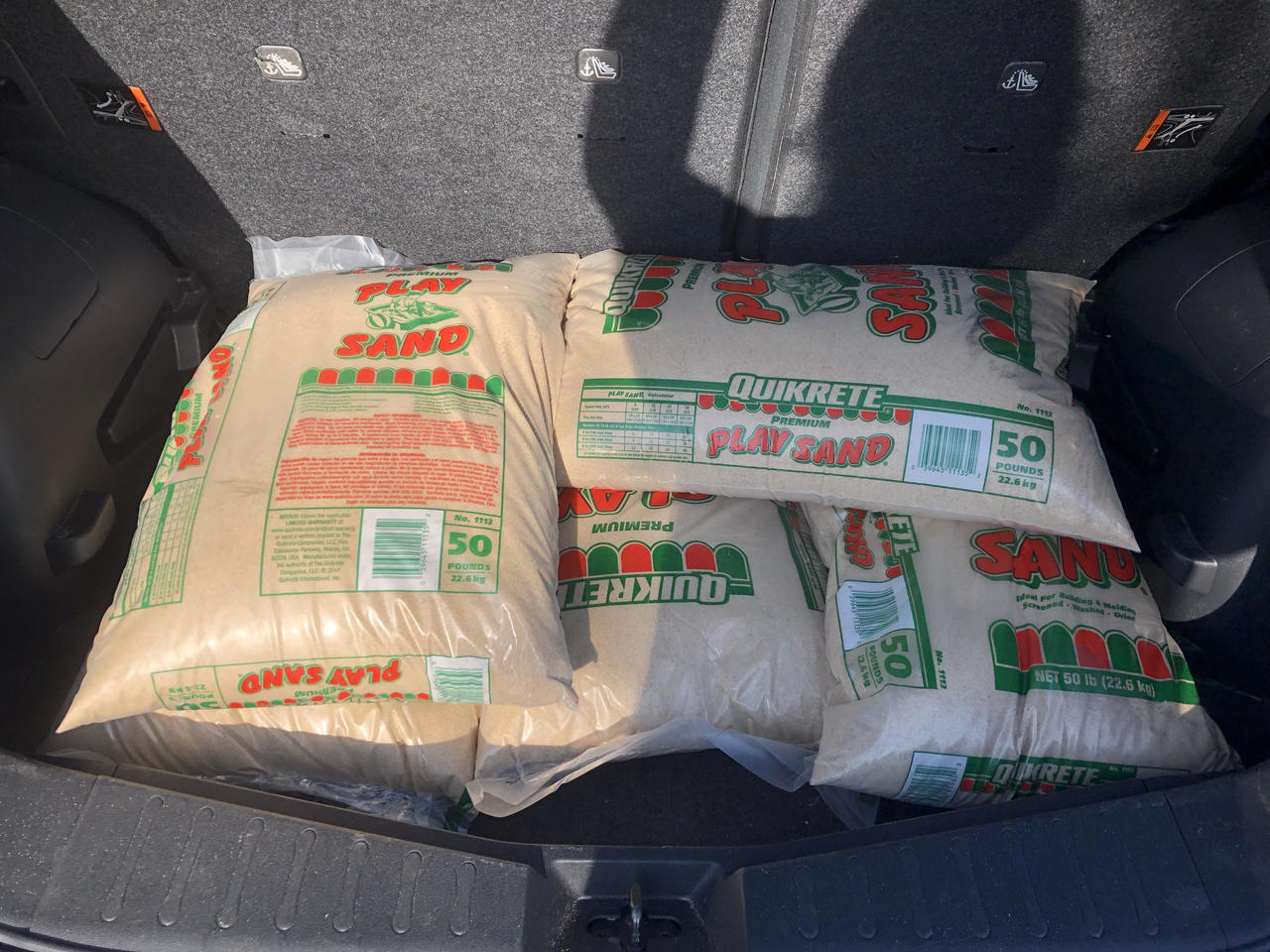 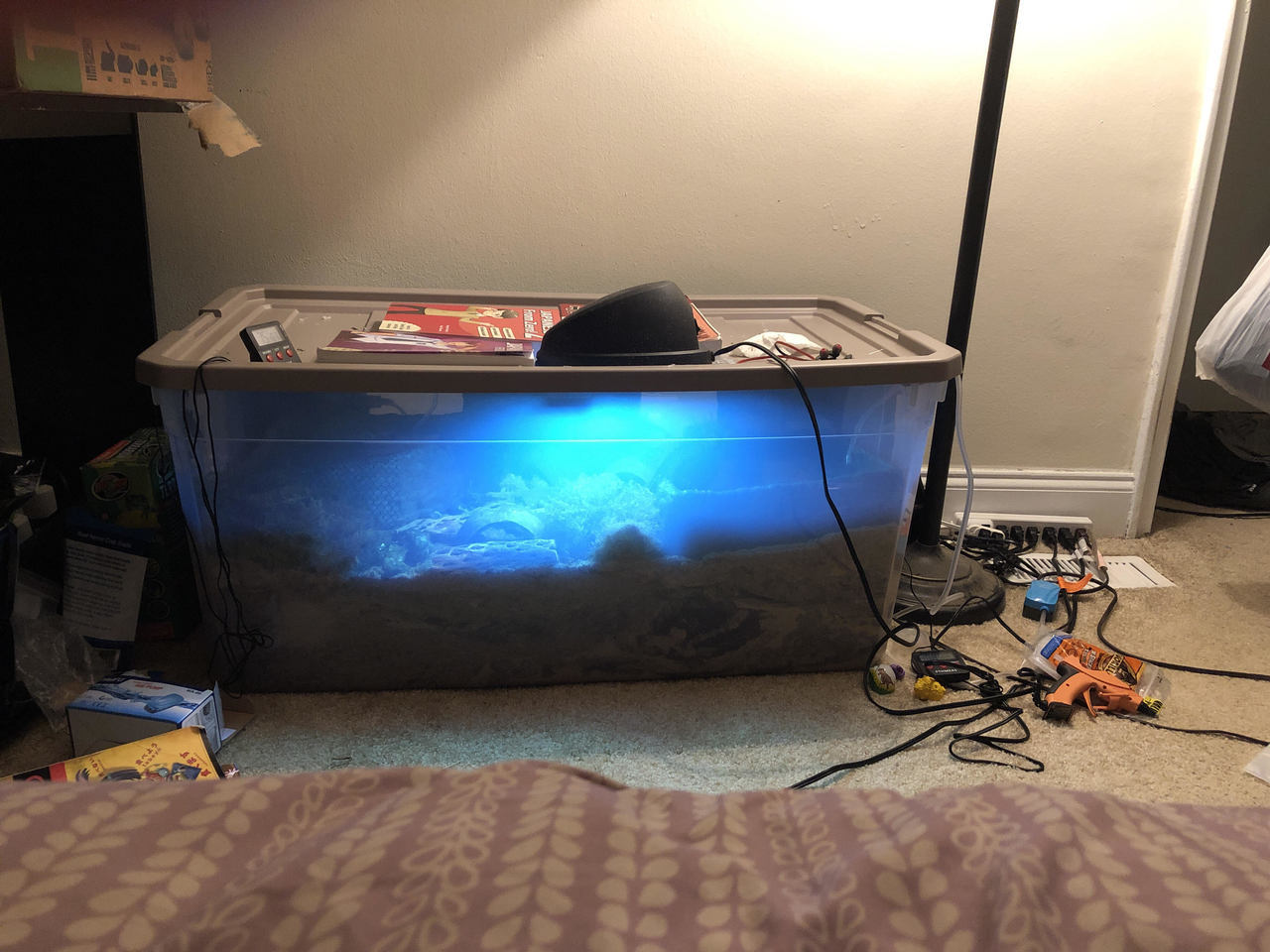 I know it's hard to tell from the image, but the substrate varies 6-7 inches. A little less than I wanted, but I wanted room at the top to add in some netting stuff for the crabs to climb on.

This was the initial set up, before a lot of the stuff was added and moved around - I placed the Crabs in (three of them). They had painted shells but quickly replaced with the newer variety I had strewn around. In less than a half hour all three had ditched the painted shells. Woo! The two bowls hold roughly a gallon of water each, one fresh and one salt. I used kitchen netting for the crabs to have something to get in and out with - I was worried they'd have difficulty but they actually picked it up real fast. I find sand and moss in the water all the time now. 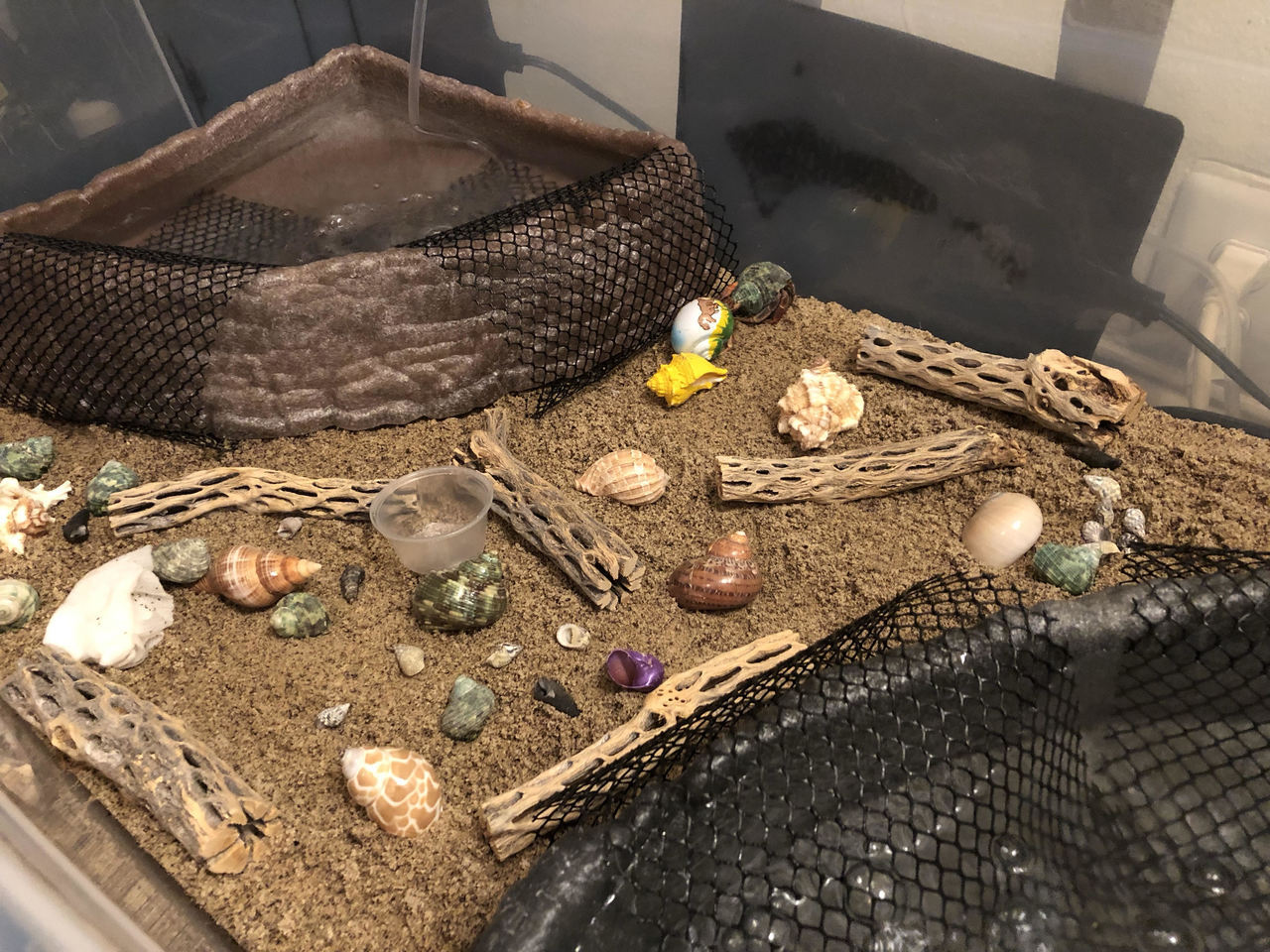 So I wanted to have some light in the crabitat during the day and so I cut out a piece of the top of the lid and put wire mesh over it. The original intent was to possibly hang a few tubes through it, but I ended up not needing it as much as I thought. I got plexiglass to cover the opening that the light can safely sit on top of. It makes a nice view spot too, right over the food dish. It's fun watching them eat. 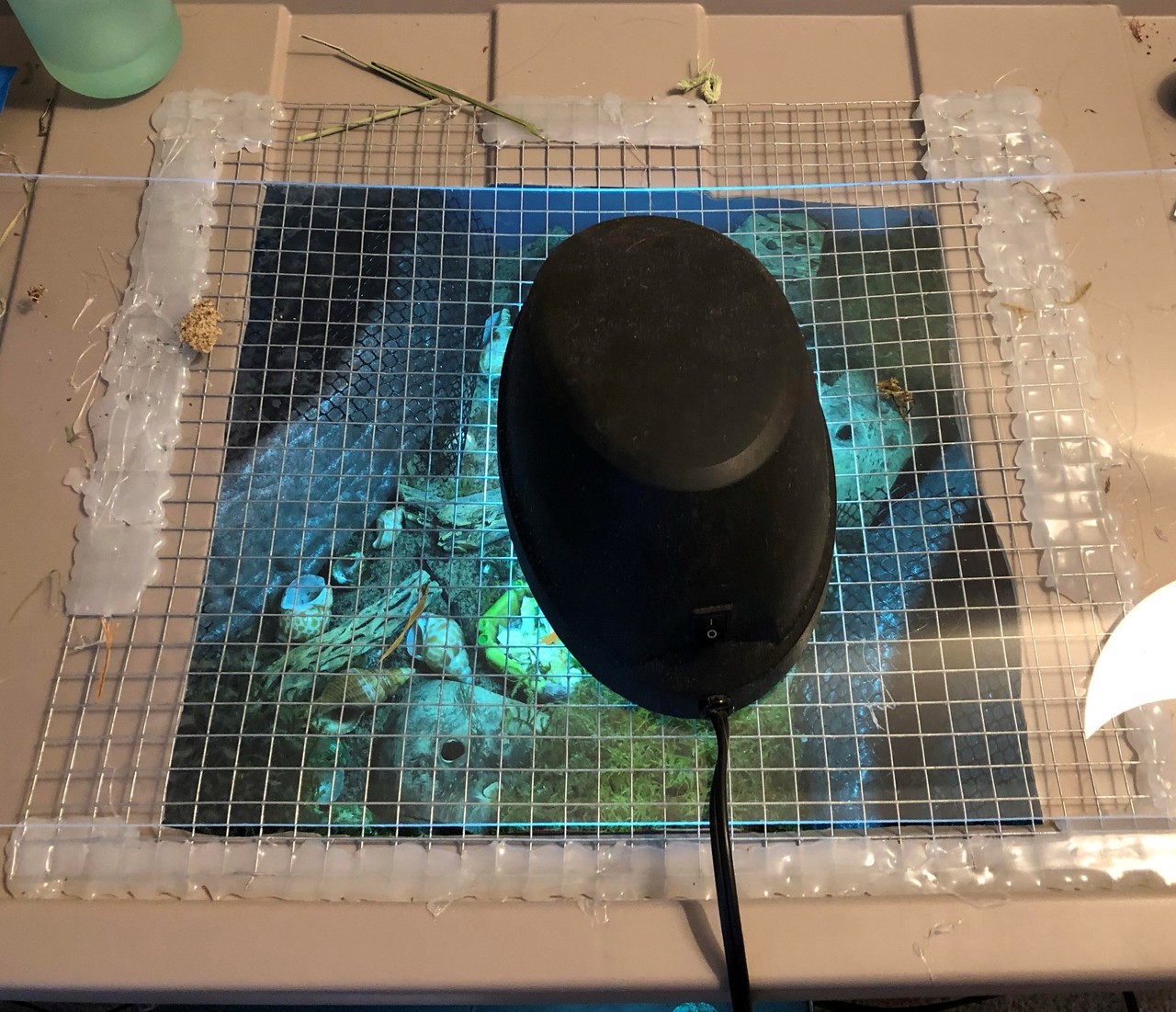 Here is the three amigos - they love the spot under one of the moss pits near one of the heating pads. But since they've been added they've actually branched out to more of the tote. 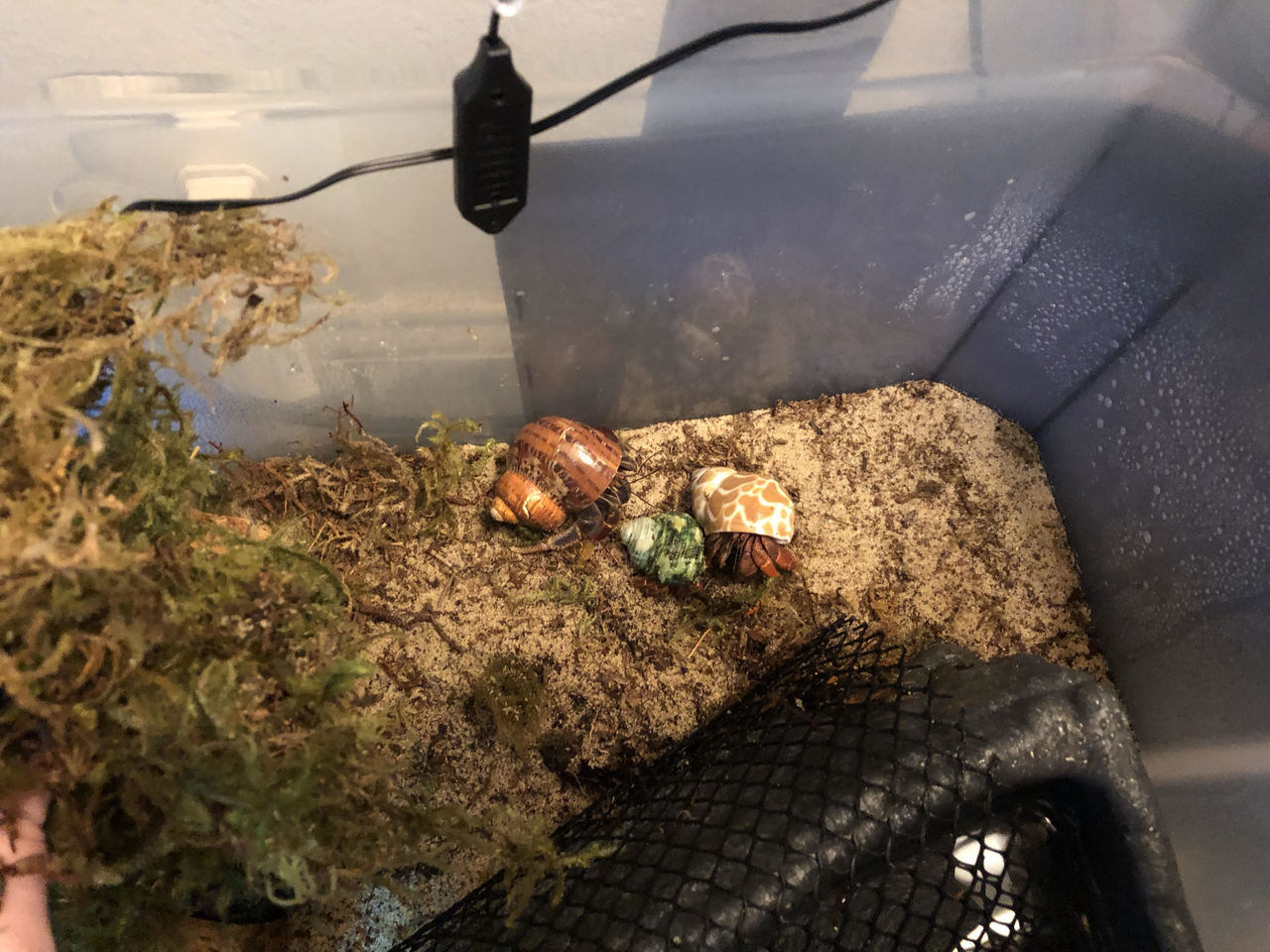 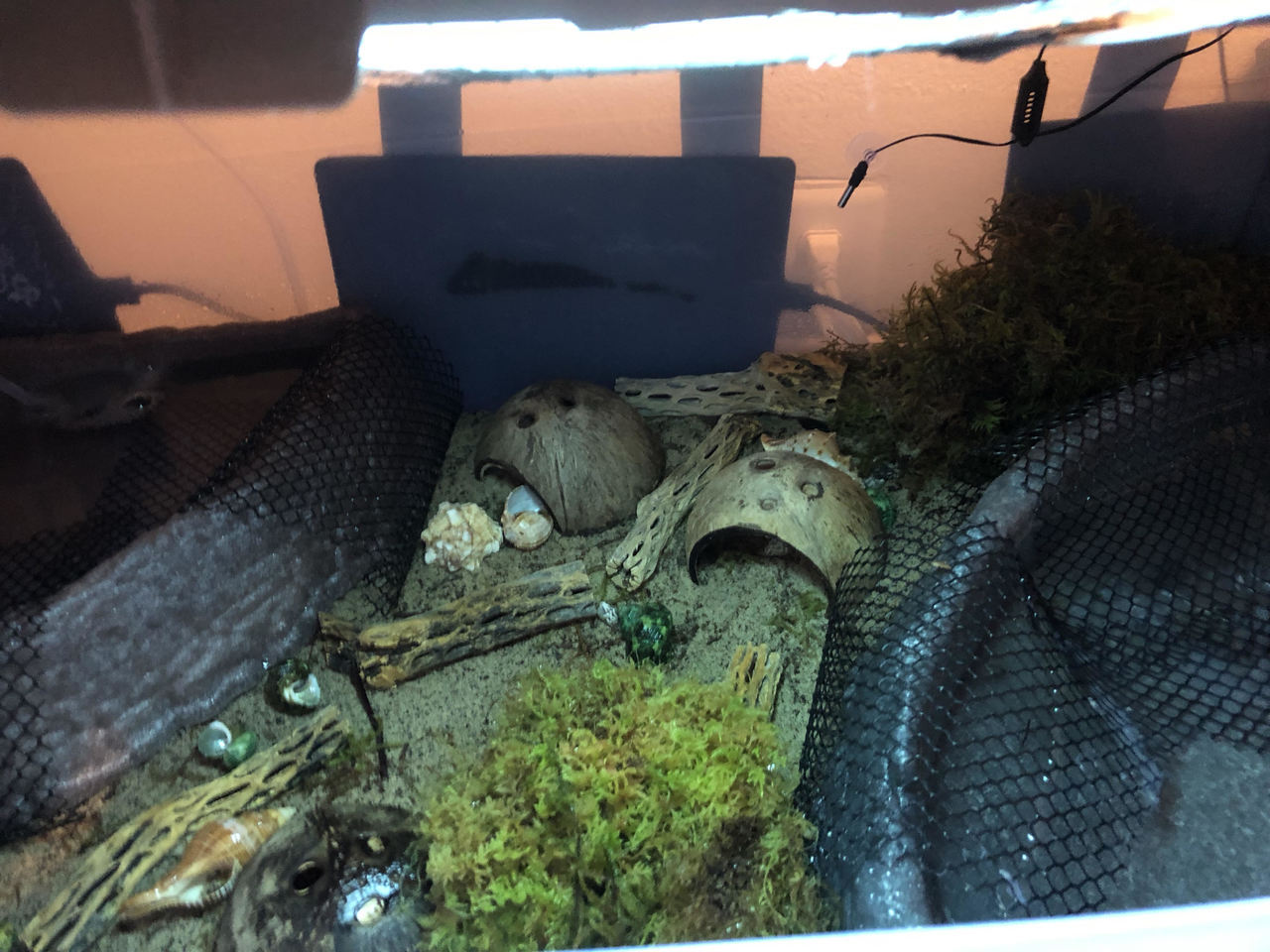 The last thing I have to add are the climbing nets. Not really "nets" persay, they're those rope hammock things. Something I know they won't get tangled up in.

Beautiful setup! I would recommend having some of the cholla wood stand up for them to climb.
3 Clypeatus or maybe two idk
Goodbye my little E. See you soon.
Crabbing for over two years!
Top

AwesomeHermit wrote: ↑
Sat Jun 22, 2019 1:13 pm
Beautiful setup! I would recommend having some of the cholla wood stand up for them to climb.

I actually tried, one of the larger of my guys has been intentionally knocking them down. And he's oddly possessive of one pieces near the heating pad. He sits on it and shoves the other crabs away from it. That's why I'm getting a rope net for them and it'll be attached along the sides and then maybe partially folded to create a partial second level. I just got the piece in the mail so I have to work out the details. 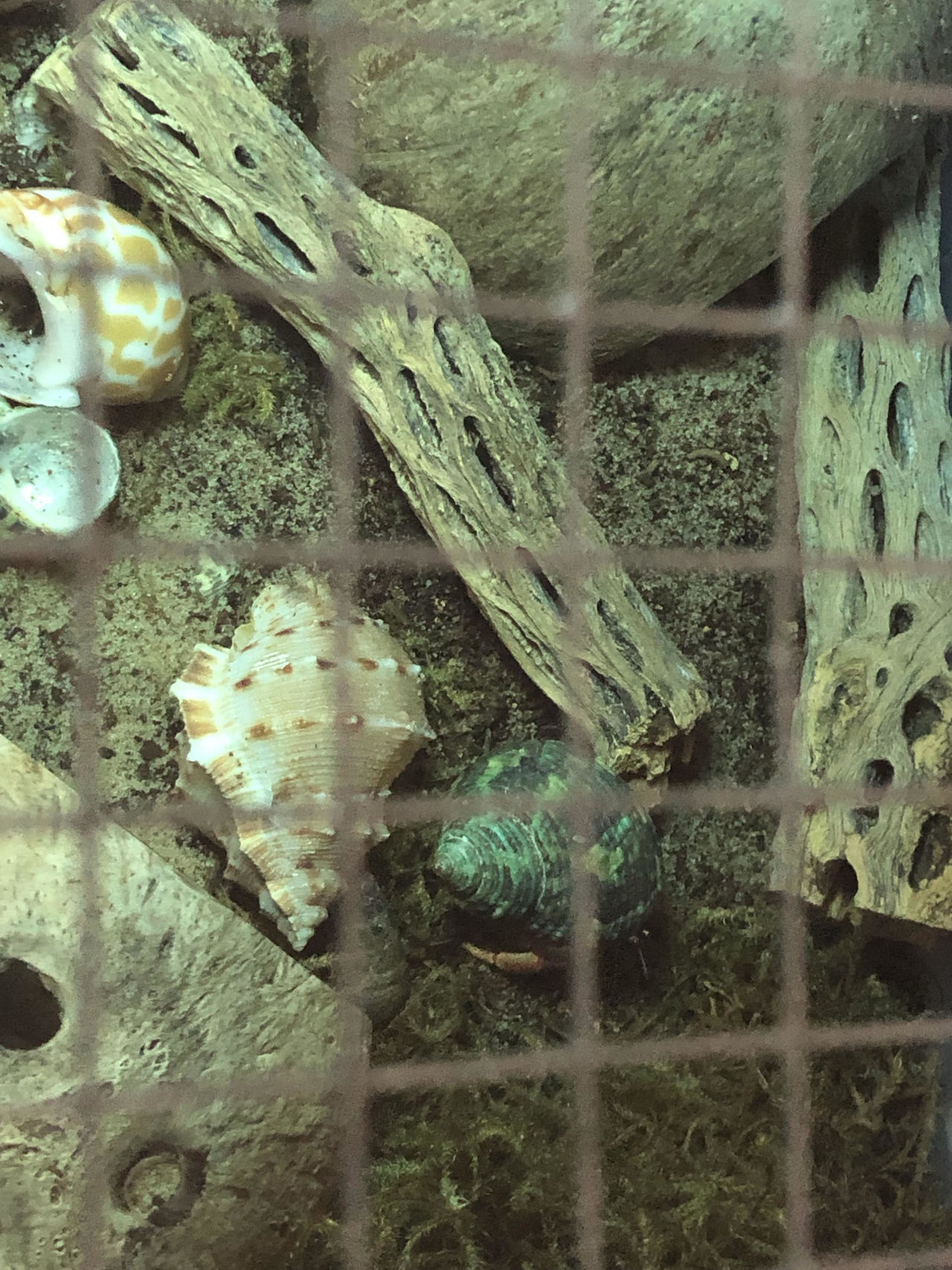 Do totes normally state whether they're food grade or not?
Top

Do totes normally state whether they're food grade or not?

The Crab Maid wrote: ↑
Fri Aug 30, 2019 3:52 pm
Depends on the brand, though if you search the brand online you should find if they are or not. I believe all Rubbermaid is, but I could be wrong.


Is that the brand you got? I'm looking at a Sterilite right now.
Top

The Crab Maid wrote: ↑
Fri Aug 30, 2019 4:37 pm
TBH I have to check, I'm not at home at the moment. It's either that or Sterilite. I had to go to walmart because they're expensive online when you try to order large ones.

I just googled and it looks like Sterilite is food safe:
http://www.sterilite.com/general_info.html
Top
Post Reply
9 posts • Page 1 of 1