I've been told I should post my crabs here!

This is a forum dedicated to Hermit Crab Association members posting pictures of their crabs and crabitats.
Post Reply
22 posts

Thank you very much! OSB is widely used here to build our own terrariums, though for anything tropical it is usually not recommended, that's why I painted it on both inside and outside with outdoor paint (with the blue angel of course, so no chemicals leaching out) and put the substrate in a box with pond liner.That way I minimize the water damage over time, though I plan on doing it differently on the next build.

Those water pools are 54 liters/~14.2? gallons, that's the standard aquarium size here in Germany as 54 liters are the minimum to keep vertebrates in an aquarium. And as I plan to keep endler guppies in there I went with that. They also fit the depth perfectly as they are 60cm deep, just like the terrarium.
Owner of 24 crabs in 200 gallons. 7 C.Perlatus, 2 C.Lila, 3 C. Rugosus, 12 unidentified C.Species
Started only 3 years ago and already hooked.
Top

Those 2 unidentified Coenobita Species seem to be Aussies, which are from Australia. Most Aussies are white, but they can orange.

Owned hermit crabs for over 10 years!
8 hermit crabs
6 Purple Pinchers and 2 Straws
Tanks: 100 gallon (6ft long) and a bunch of smaller ones
Top

This is amazingly phenomenal!!!

I envy your tank!

I would love to do something very similar but I don't know how you have everything set up. I have so many questions but don't want to bother you with all of them. I would love to see step by step everything you did, if you have it documented online somewhere.

I've been thinking of starting a new tank and get some plants established before adding crabs. And I did't expect to have a drainage layer but since you have one, I am now reconsidering.

Anyway, awesome crabitat and hope to see more posts from you!
Top

Thank you very much! Feel free to ask all the questions you have!

And luckily for you I did document the build (somewhat), at least good enough to trace back my steps!
https://imgur.com/a/xGkK0zs

I even have a quick gallery of the plantgrowth (which is a LOT):
https://imgur.com/a/NfNu7jq

On the next build I plan on doing a more detailed documentary, I'll also do some steps differently like the background. I'll line the complete interior with pond liner, put in the aquariums in a 90° rotation (so you have a proper view on them from the front rather than a sidepanel), glue in a cocofiber mat as background and add on detail to that (kind of like SerpaDesign does) and of course make it bigger (and more refined than their current one). I won't be adding the pipes in the background again (getting the cables from filter/heater through that is a pain in the butt), I'll rather have a small hole in the sidepanel where I put them through. Makes access easier and it would be even smaller, so no crabs can climb through it.
For the pools I want to try the Asu (credit where credit is due: https://www.youtube.com/watch?v=OZIiGZD3AQ0) approach, building my own 3D background from stones I have in my garden soil in the aquarium so the crabs have an easier time to climb in and out (plus it looks just SO good). That way I can easily hide the filter/heater, though I am not sure how I'd make that work for the saltwater as evaporation would be a concern, plus hiding a proteinskimmer that I want to add could be a bit hard. I'll test the drainage before adding all the substrate as I apparently have a small hole in the pond liner, so if I water too much I actually see water coming out of the front of the terrarium.
The OSB is a bit swolen due to the leak but that is nothing major as I have a 3.5 cm thick bottom plate and I don't water often (every couple weeks about 1 1/2 liters total for all the plants)
I'll also build it from chipboard (basically those boards made from fine sawdust rather than big chunks) as it looks a lot cleaner, is easier to paint (to seal it) and generally easier to work with.

I also have plans for the plants as I want to switch to non toxic plants only, this is not only a precaution in case any crabs wants to eat a leaf, but also because I plan on adding bigger millipedes as part of a bigger cleanup crew (currently only a giant swarm of isopods and some springtails). Maybe I'll add some fruitgrowing plants so the crabs can scavenge for themselves?

I plan on adding endler guppies to the aquarium as I have to harden up the water anyway (I've learned that crabs prefer harder freshwater, and as I want to keep guppies that's a perfect fit!) and maybe, if I get all the water parameters right, make the saltwater look better too with some simple corals and maybe a goby+pistolshrimp.

Lots of plans for the future, and I hope I'll be able to pull off what I have in mind!
Owner of 24 crabs in 200 gallons. 7 C.Perlatus, 2 C.Lila, 3 C. Rugosus, 12 unidentified C.Species
Started only 3 years ago and already hooked.
Top


Wow big plans and thank you for sharing those links!

A few questions I can think of now are:

What is your temperature and humidity and what equipment?

What is the lighting equipment?

Do you have anything to create airflow?

And how are the pools constructed and what equipment for them? You may have already answered this question and I will look back and read.
Top

Temperature: 22-26°C / 71-79°F depending on where you measure (the closer to the heatlamp the warmer, in it's proximity on the background there are actually about 33-35°C/ 91-95°F, though only on a small spot)
Humidity: 70-99% (again depending on where you measure)
Due to the different climates within the tank the crabs can freely choose where they want to be, whether they want to be a bit warmer with less humidity or a bit colder with higher humidity.

I'm using a Lucky Reptile Thermo Control Pro 2 to control the 150 watt ceramic heatlamp, that and the 2 heated aquariums keep the crabitat nicely warm. For the humidity I am just running a "Dragon Magic Fog" fogger (I run it 5 times a day for 10 minutes) and spray the tank down every couple days.
Since the aquariums are heated too they have some evaporation that also helps at keeping the humidity up. I also have lots of airflow, so mold is no problem whatsoever.

For lights I just use floodlights and some cheap plant growing lights (two from a local store and one from Ikea lol)
Here is a picture of the lightning situation: 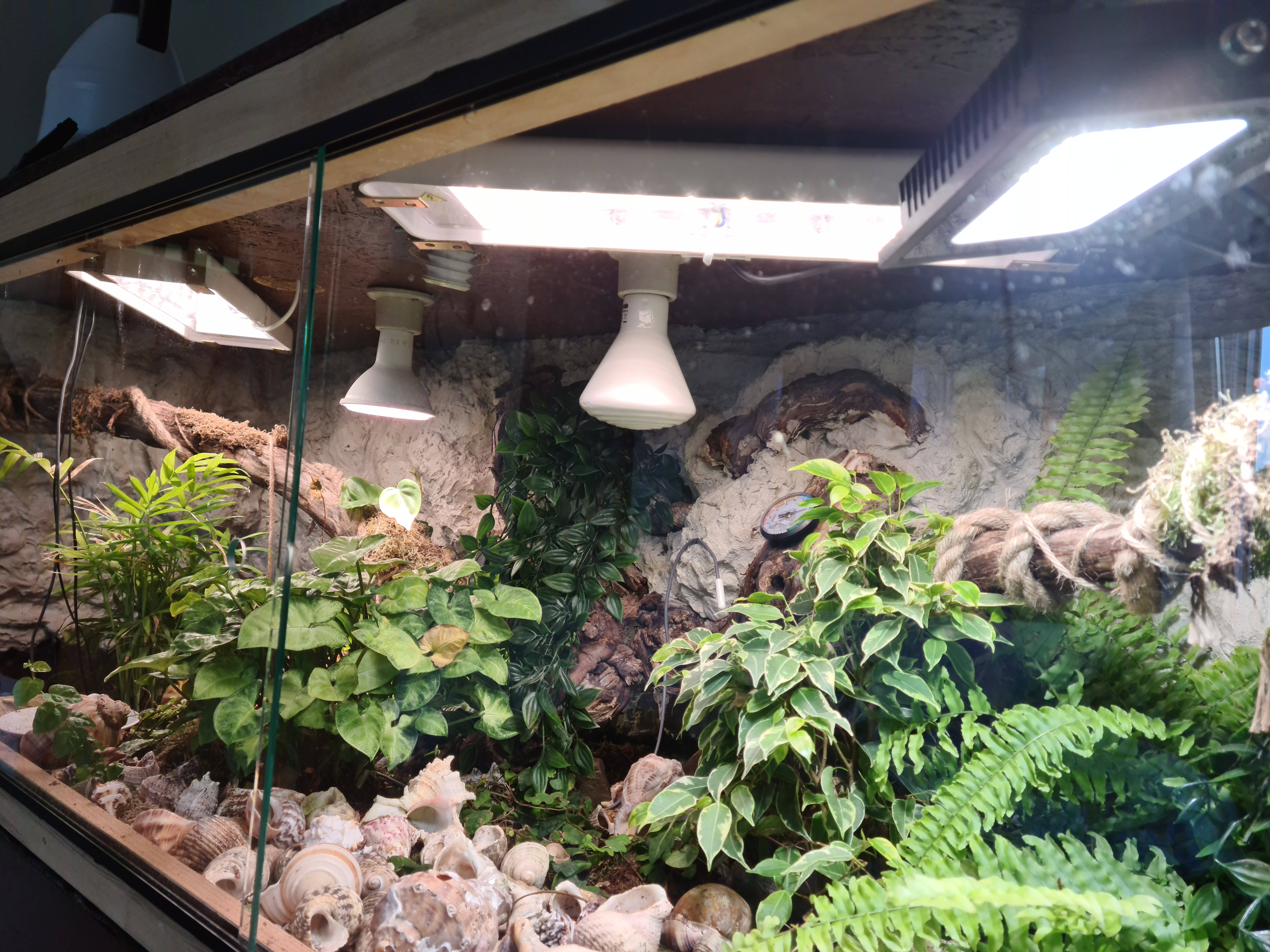 I don't use any equipment what so ever for airflow. I just rely on the good old "warm air rises up", I have 5 holes (covered with fine metal mesh) on the top and three holes in the side. They are about 10cm/4 inches in diameter. The air in the crabitat is not stale at all, just very humid/warm. So it seems to be working fine.

Equipment for the pools: Each pool holds 54 liters/ 14.2 gallons of water, I use a 50 watt Tetra heater for each and some small 5 watt filter, as I don't have any fish in there the filter doesn't need to be huge. I just want a bit of water movement and a bit of filtering. I added the 35 watt floodlight above the freshwater tank as it was too dark for the plants to survive (you know it's bad when a javafern doesn't thrive), since then it is nicely lit up.

Here is a link on how I built the crabitat, I hope that'll solve the question on how I implemented the aquariums.
https://imgur.com/a/xGkK0zs

For the background (I can not recommend it): I have the process in the link above, but in case I didn't write it out/document it properly: I basically covered the whole back/sides of the tank in expansion foam for wells, it is water resistant and won't go bad with the humidity. While it was still fresh I added the grapevine to it and added some more foam to the ends to anchor it in place.

As you may see in the playlist I tried to cover it in Aquarium silicone and tried to adhere coco-fiber substrate to it to give it a nice look. Well, that didn't work out, I'd guess because I didn't peel off the shiny layer, which led to the silicone not sticking. I could pull it straight off again.
So I had to rip off the shiny expansion foam layer, that process took about 2 weeks or so as I didn't want to use tools to keep a somewhat natural look (my fingers hurt so bad lol).

When I was finally done with that I decided to just cover it all in tile adhesive, it gives a rock like structure which is grippy enough for the crabs to climb on while also being sturdy and, when it is dry, doesn't release any chemicals and becomes inert (like the expansion foam). It was also really cheap as a 20kg bag of that stuff costs like 10€, and you can get a lot out of 20kg.
I put on 3 layers of that stuff so it's thick and not brittle.

In the end it worked out somewhat fine, but I wouldn't do it like that again. Next time I'll just put giant cocofiber mats all around and add structures on to that.
Owner of 24 crabs in 200 gallons. 7 C.Perlatus, 2 C.Lila, 3 C. Rugosus, 12 unidentified C.Species
Started only 3 years ago and already hooked.
Top
Post Reply
22 posts