This is the place to post if you have questions and aren't sure where to ask them! If it relates to one of the sections below, please post there instead.
Post Reply
12 posts • Page 1 of 1

Okay, so I have 2 questions.Im a (somewhat) new hermit crab mama, and where I live, it’s pretty hard to find non painted/glossed shells that are suitable for hermies... so I found a pack of shells that my parents got YEARSSS ago, and it had so many natural shells that were the size I needed. But I noticed there was stuff growing on them from being untouched for so long. I assume it was mold, but I’m not 100%, but it was sealed and everything when I initially opened it. I wiped as much of the stuff off as I could with a Clorox wipe, then I rinsed them good, then boiled THE CRAP out of them. So my question is, do you guys think they would be okay to use? And if not, is there anything that you guys suggest that maybe I could do to get them to a “useable” state?

Next question would be, would I be able to use sticks from outside in my tank? I planned on peeling the bark off of them, cutting them to size, and boiling them to kill any harmful bacteria. I’m just in a tough finacial bind right now and can’t really go out and buy anything for them to climb on, so I wanna do what I can until I have extra money. I never intended on even having these hermit crabs. I somewhat “rescued” them because A family member went out and bought them while we were on vacation, and then all of a sudden decided that she did not think they would survive the ride back home, and said if I did not want them she was just going to release them “back” into the ocean ... and for one, I don’t have saltwater hermit crabs. I have land hermit crabs. So they basically probably would have died. But she was too stubborn to hear that. So I took them. And she had them in one of them plastic cages, with fish pebbles at the bottom. No substrate at all. She didn’t even have a salt water dish. So I did what research I could, in the time I was given, and I just went out and bought everything that they essentially needed to stay alive. But I wanna also make sure they can have fun too, so until I have the extra money, I wanted to make sure they had stuff to climb on and what not. But I just want to make sure it’s safe for them before I do it. Sorry for the long topic. I just felt like a little backstory was needed because I’m new here LOL
Top

As long as the wood from the outside hasn't been sprayed, it should be ok. You can bake it to kill bugs and such.

Also, check out the pictures on this site and look at other crabitats for ideas. My husband and I do a lot of crabby crafting with household stuff. Terra cotta pots work great for moss hides and leaf litter. Fake plants, zip ties, command hooks..look around. We cut doors in plastic food containers as hides. They love (crabsolutely love!) Hamster wheels! These are cheap dollar tree containers. For adhesive always use aquarium silicone and let dry 2-3 days before adding to the tank. We used natural unpainted stones and pieces of fake plants. 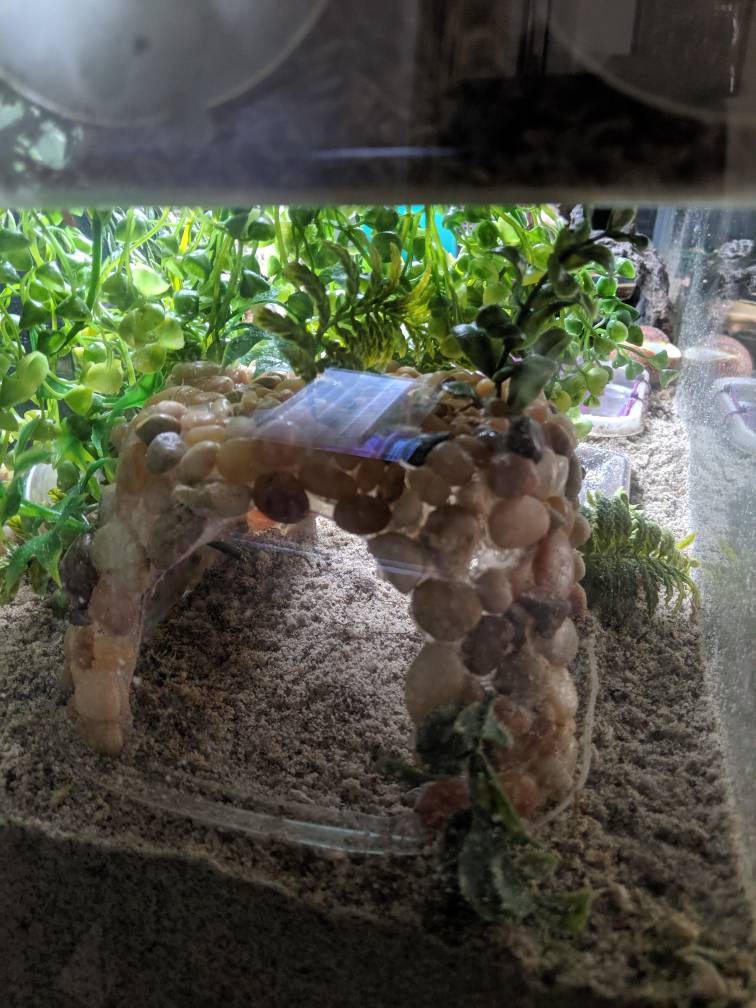 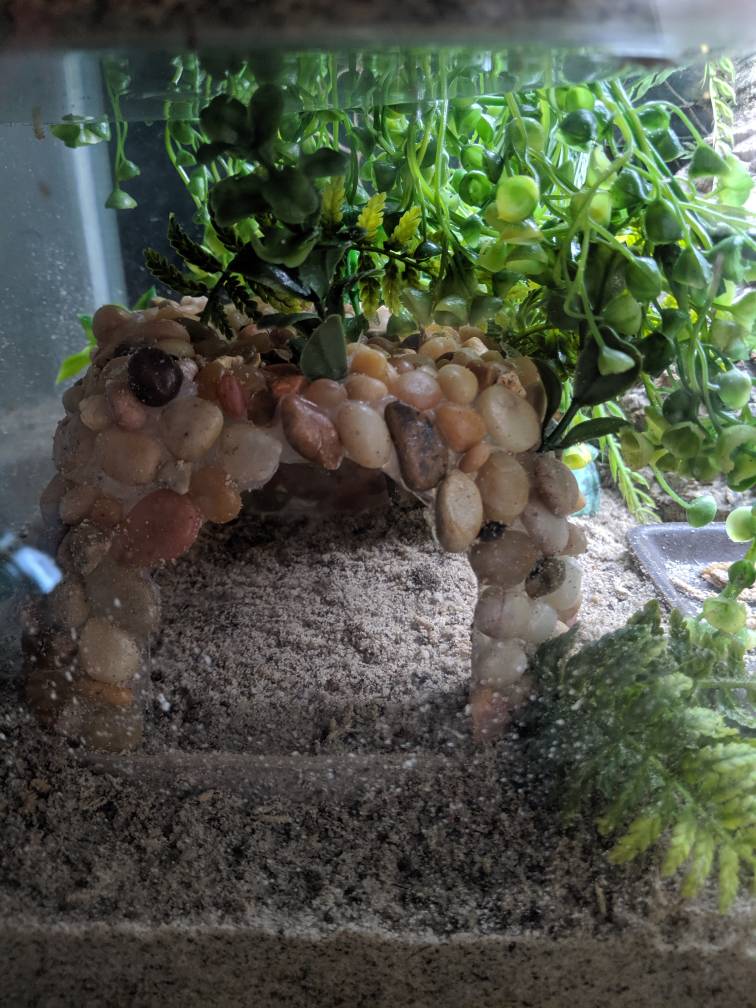 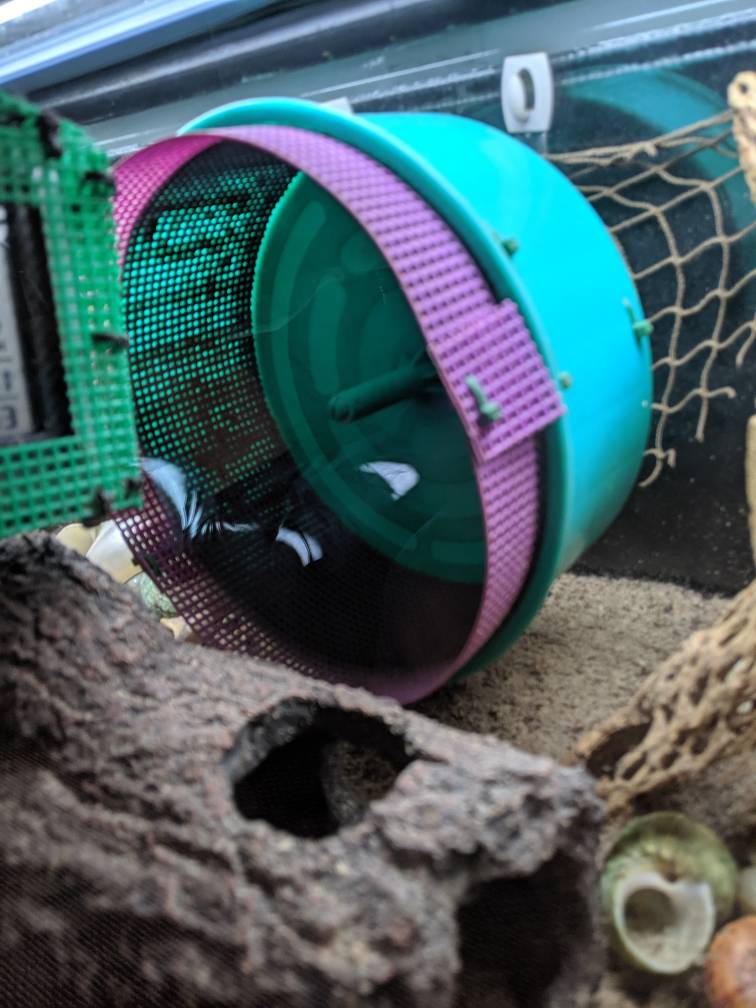 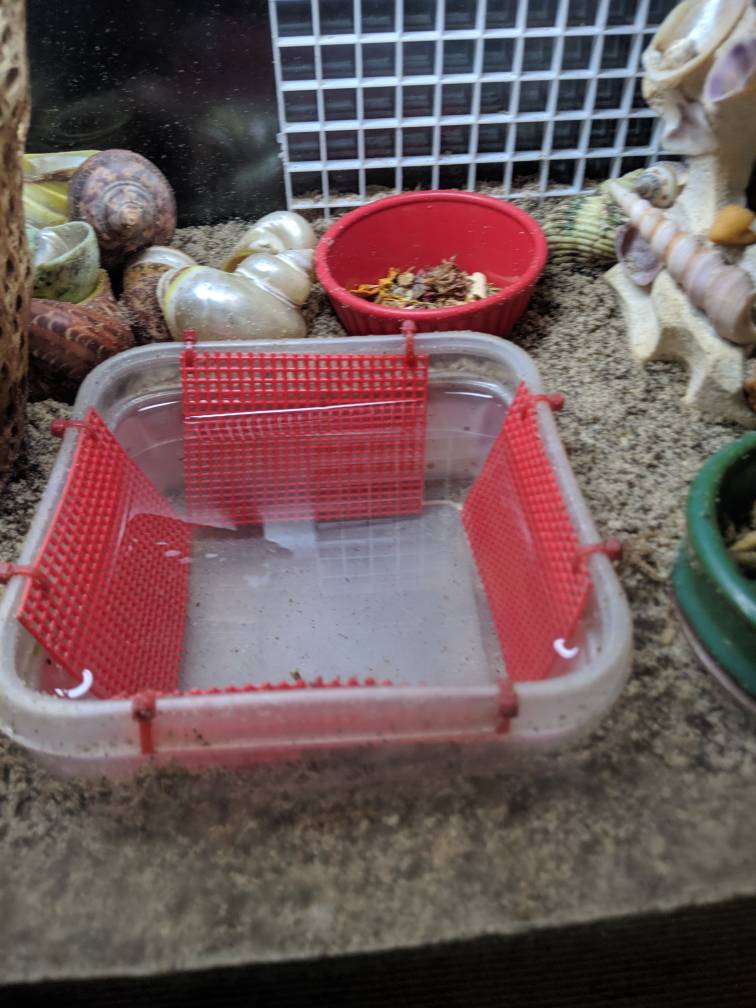 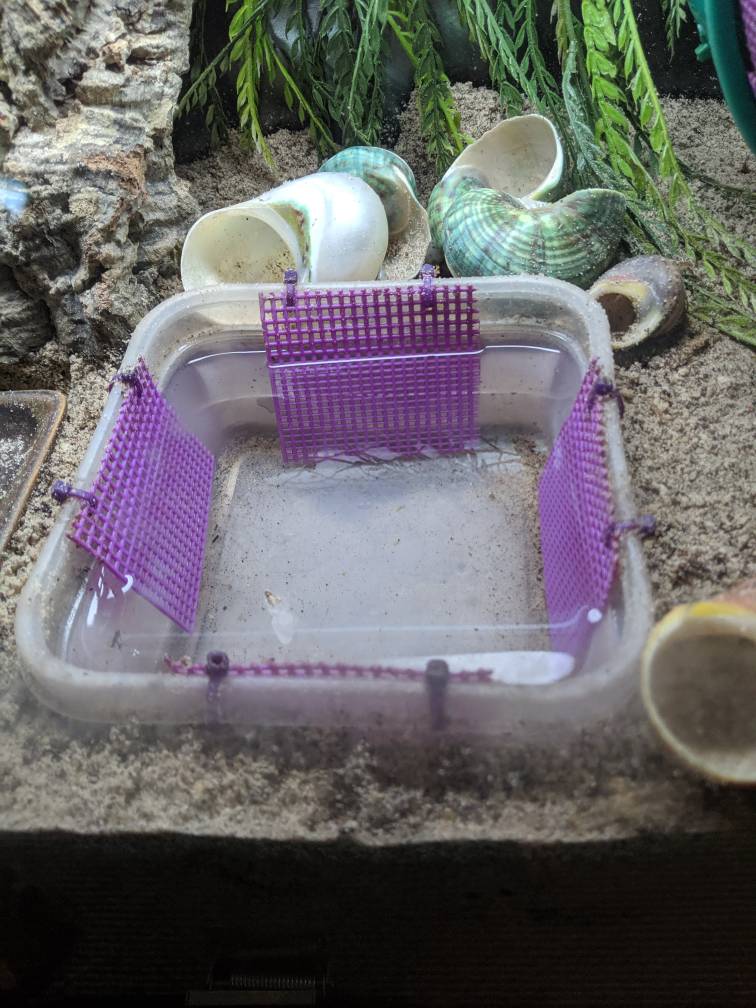 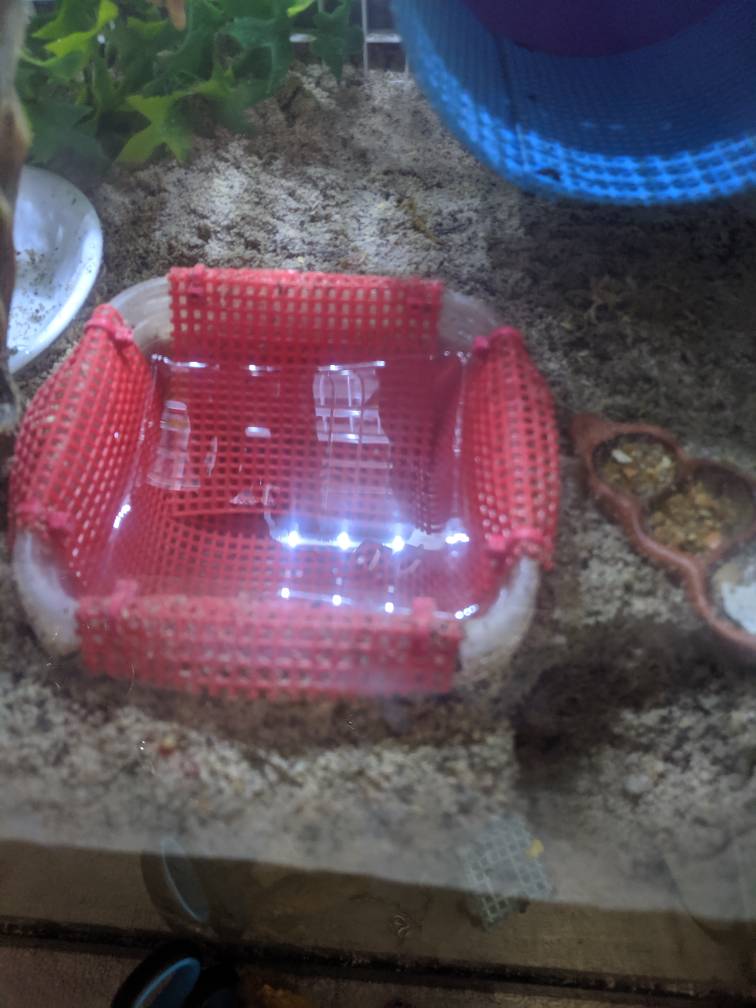 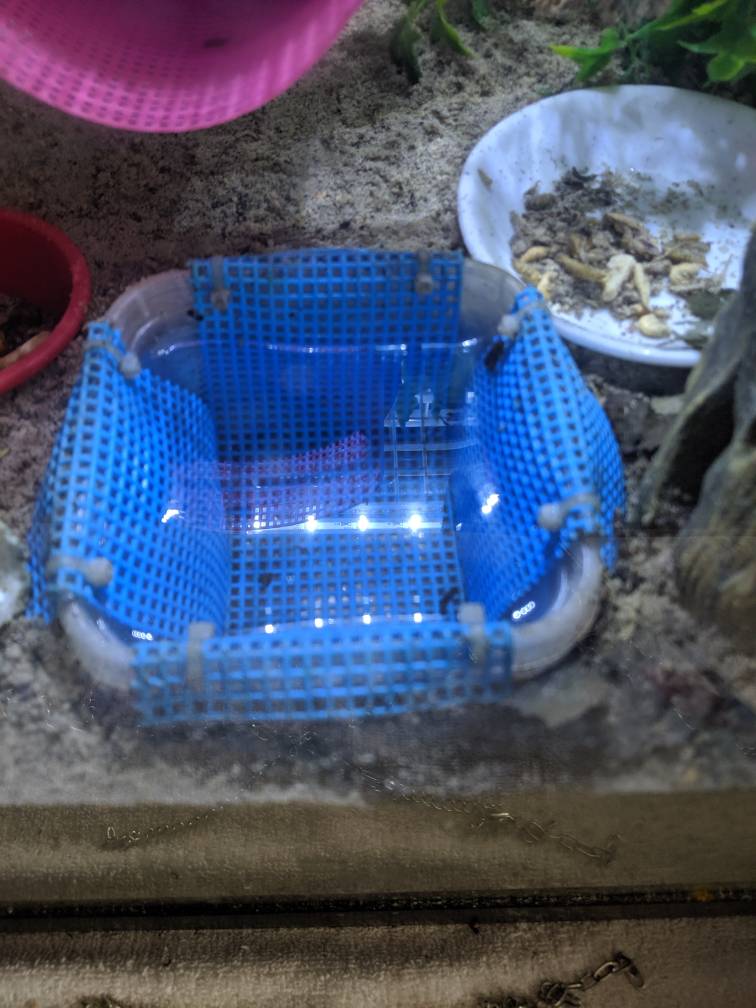 Wow, thank you!! And yes, I have salt water and the dechlorinated water as well. And I feed them yummy fresh fruits and veggies (along with reg hermit food) so thank you for your replies on that! Definitely love your crabitat!!!! Do you have any insight or knowledge of whether or not the shells would be okay? I can take a pic a post what they look like, but there was some sort of bacteria growing all inside the gift basket of all the shells. But I disinfected them, rinsed them really good and also boiled them too. So I just don’t know whether whatever was on It would be dead and safe for my hermits??
Top

im trying to figure out how to post a pic of my crabitat, but I’m not using a computer, so I can’t figure out how to get them in here lol!! I literally just started my acct today, so I have no idea what I’m doing

It's easier if you download the Tapatalk app onto your phone to post pics. As far as the shells, you boiled them. Do they have any holes? If so, don't use. If not, dip them in your dc salt water and add them to the tank. Watch and see! A lot of people, including us buy from Naples and Ken Lipe, the Shell Store. I believe Naples is Naples shells or seashells. Do you know how to measure the shells to see if you are getting the right sizes? If not, I know Ken Lipe will be able to help you!
6 babies, 4 Es and 15 PPs.
Top

From what I’ve read, which I don’t know if it is completely accurate, but you are supposed to measure the holes by how big the biggest pincher is. And if that is true, they are in shells right now that are way too big for them. Because they aren’t that big. But the hole in the shell is way bigger than their biggest pincher. So I don’t know if that is accurate or not. But regardless, I have shells of all sizes right now. I have Ones that will definitely be too small, ones that are about the same size as the ones they are using now, and bigger ones. I’m going to try to put some in there that are the same size as they are now, along with some bigger ones, because as of right now, they are in painted shells and I want to encourage them to get into different ones because I want them out of those toxic things! So hopefully if I put a bunch of them in there, they will slither out of the toxic ones and go into the natural ones. There are some with holes in them, but I definitely would not use them. Especially if they are holes forward to the back where their most vulnerable body parts are. There were a couple of shells that I have, that have a tiny hole in the beginning part of the shell, where they would originally enter into it, so I did not know if those were OK or not. Because the only part that would be exposed through that hole, is their exoskeleton anyways. But maybe just to be on the safe side, I won’t even bother. But I don’t think we have any of those stores around me. I am in North Carolina, Charlotte area. So I’m nowhere near a coast store or a seashell shop. I could be wrong though, I will definitely take a look. Someone else mentioned places like, hobby lobby. Or other craft stores because they sell seashells I guess??
Top

Also, i will download that app, thank you for recommending it

Those stores also ship as well, even if you're not nearby to pick them up locally.

Sent from my ONEPLUS A5010 using Tapatalk

Oh nice!!! Thanks!! I didn’t know that either. But now that I think of it, I probably should’ve know that considering everything is surrounded by technology these days! Lol thanks everybody!
Top

Funny thing is I found shells for my smaller hermits at dollar general! A bag of variety of shells for $3! I don’t live near the coast either (unfortunately) so I have to try and make due. I did just order some from hermitcrabpatch.com though that I’m waiting to come in for my crabs and my mom’s bigger ones.
Top
Post Reply
12 posts • Page 1 of 1