This forum is where you discuss issues relating to molting hermit crabs, including pre- and post-molting issues. If you are having a molting emergency please post in the Emergency Forum.
Post Reply
163 posts

That's what we were just talking about. Since he can't move around, maybe being in the substrate stressed him out. On the crab mesh he can use his one leg to drag himself around. Or maybe he was having a terrible flash back of being in that awful bacterial bloom

and that stressed him out.
He can slide around on the mesh, but in the substrate his shell sinks down and makes mobility impossible.
I wish he could talk or communicate with us and let us know. He has no idea how much he is loved.

He's going to go back in the small critter keeper tonight. I think that may have been the issue. I don't think he can move on top of normal substrate. He was in the same spot from when I put him there this morning. Pretty much like a car in mud. Only one wheel spinning won't move the car. I think with the mesh floor he can reach out, grip, and pull to move around.

I did manage to get him reshelled into a little bit bigger shell. I believe this one is modified on the inside too. The shell he was in has a 3/4 opening. This one is more between 7/8-1". I just hope he doesn't decide to try and change without me. I'm not sure how he would do changing with one leg.

He does seem to be eating now. Calcium carbonate he made into a paste dropping water onto it. Now he is eating brine shrimp eggs.

I hope everything is back to normal after his streaking.

Comparison of his old and new shell. 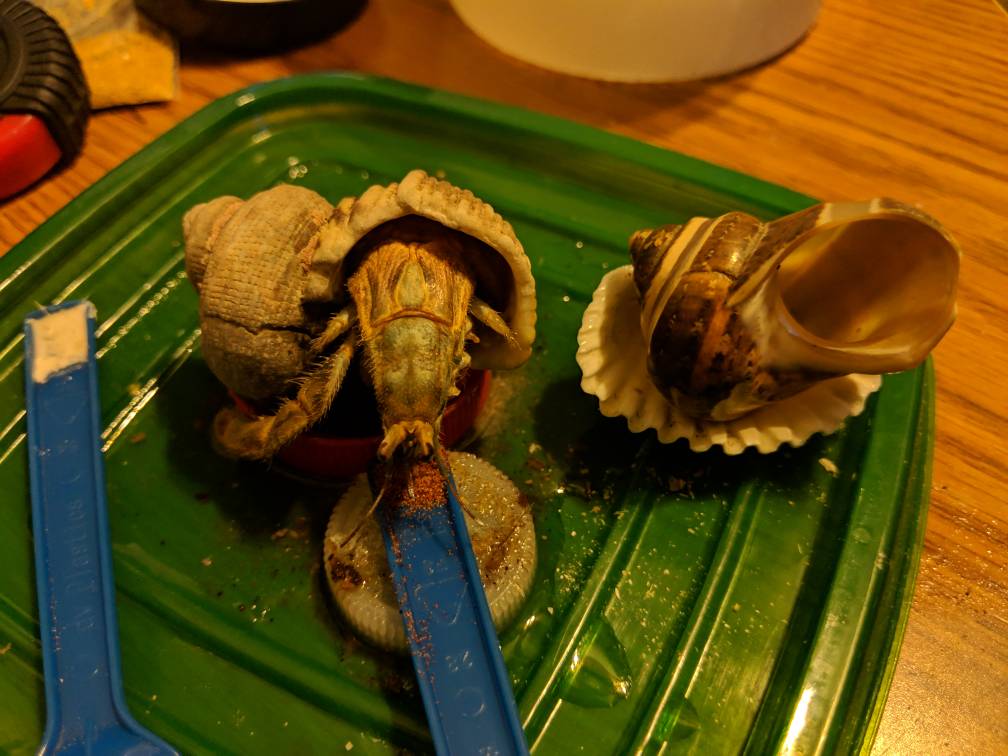 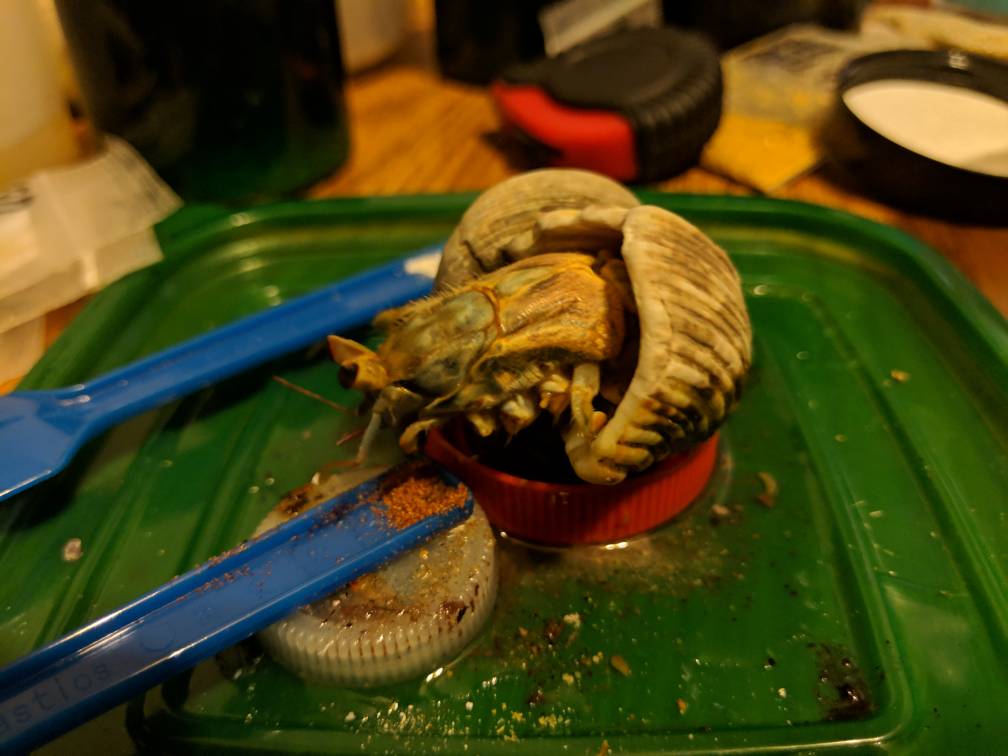 Sent from my Pixel 2 using Tapatalk

I hope maybe he was just that comfortable to come out of his shell in the water. I know that’s not what they do but maybe with Eddie’s situation it would be different. Hopefully getting him set up how he was will make him comfortable again. He’s got to be uncomfortable and with a molt coming on, it can’t make that any better. I know they are hermit crabs but they are more sensitive and complicated than anyone will ever really get to know. Keeping him in our thoughts and prayers and sending you some healing crabby vibes. We love you, Eddie, you got this little buddy! <3
Top

An update on Eddie after he decided to go skinny dipping.

It was very frustrating trying to reshell him in the original shell. He fought me every step of the way. Eddie kept his abdomen currled so he wouldn't fit. He also put his leg down at the opening so even he started in he wouldn't go any further. Luckily when I tried the new shell he went in on his own.

During his feeding I put him in the fresh water several times for a few minutes. He didn't try to crawl out of his shell any time.

Like Stacy said, if it isn't broke don't fix it. Not that I'm hoping I caused him stress but I'm hoping I caused him stress by changing up his ISO last night. He was still in the same spot at 6pm tonight as he was at 7:30 am when I left for work. I am hoping not being able to move on the soft substrate compared to being able to grip and pull was the reason. Needless to say Eddie is back in the small ISO how it was.

This was a real reality check on how delicate and environment changes can really affect hermit crabs. After you have them for a while you tend to forget. They may not be able to tell you outroght, "Hey human, I don't like this! Fix it!" They do let you know in their own way for sure.

I just hope this was an one time incident either wanting a new shell or because of the ISO change. Only time will tell.

I keep telling myself over and over, crabs are "EASY" to care for!

Sent from my Pixel 2 using Tapatalk

sometimes they crawl out of their shell to bathe. mine have never done that, though.
I love my little Acorn! #besthermitcrabever
I also Love Jesus! My favorite food is doughnuts, my favorite drink is orange soda,
and my favorite color is gold! (I like shiny things)

purplepincher wrote:sometimes they crawl out of their shell to bathe. mine have never done that, though.

I don’t think they’d leave their shell just to take a bath. That’s a security flaw.

purplepincher wrote: ↑
Wed Apr 24, 2019 7:48 am
sometimes they crawl out of their shell to bathe. mine have never done that, though.

I agree with JoeHermits, crabs do not go out of their shells to bathe
One or hopefully two Clypeatus
Goodbye my little E. See you soon.
Bye Fred. You lasted almost 4 years with me. Hope you're with my E now! See you soon Reeba as well. I can't believe I lost you only after a month.
Crabbing for 4 years!
Top

I read something that said that, hold on, let me copy and paste it.
I love my little Acorn! #besthermitcrabever
I also Love Jesus! My favorite food is doughnuts, my favorite drink is orange soda,
and my favorite color is gold! (I like shiny things)

never mind, i couldnt find the book, but it said that crabs exit their shells to bathe if they cant get some dirt off of their abdomen.
I love my little Acorn! #besthermitcrabever
I also Love Jesus! My favorite food is doughnuts, my favorite drink is orange soda,
and my favorite color is gold! (I like shiny things)

i may be wrong, but i am just telling you what i read.
I love my little Acorn! #besthermitcrabever
I also Love Jesus! My favorite food is doughnuts, my favorite drink is orange soda,
and my favorite color is gold! (I like shiny things)

I’m sorry I haven’t been around to follow this the whole time but I read through to get caught up- wow!! Eddie the E is surely a trooper! And what an amazing crab mom and dad he has too! I think what you guys have done for him is nothing short of amazing- I applaud anyone with the patience and dedication to care for a disabled crab like this. Not saying I wouldn’t try my hardest too, but anyone who has done similar has my admiration.

I surely hope the stresses were already pinpointed and relieved for him, and he doesn’t have any more naked surprises for you! We’re rooting for you, Eddie!

Overmountain1 wrote:Eddie the E is surely a trooper!

Thanks, we have been really trying to get him back into shape. As long as he has the will to keep fighting we will be there to help him.

It's funny you say he is a trooper. Eddie is named after Iron Maiden's mascot and The Trooper is one of their most popular songs!

Tonight there was no streaking from Eddie or myself. Lol! I'm hoping that was a one and done incident.

Eddie's appetite was ok, not the best tonight. He picked at some bee pollen and turkey, possibly a little exo repair mix too. The rest he didn't touch or wasn't enough to tell he ate any.


Sent from my Pixel 2 using Tapatalk

Sent from my iPhone using Tapatalk
Truly blessed to have incredible creatures, wonderful friends and my amazing family in my life!! I'm very thankful & grateful for all of them! www.thehealthyhermit.com
Top

purplepincher wrote:sometimes they crawl out of their shell to bathe. mine have never done that, though.

A crab should never leave their shell unless they are trying on another one.


Sent from my iPhone using Tapatalk
Truly blessed to have incredible creatures, wonderful friends and my amazing family in my life!! I'm very thankful & grateful for all of them! www.thehealthyhermit.com
Top

This morning when I got Eddie out of his ISO he seem unresponsive and limp half in and out of his shell. I gave him a tap or two on his head and he started moving. I started his saltwater bath and he climbed out of his shell again. I reshelled him and started to give him raw organic honey on a swab. He seemed to eat some of that.

I know these are normally bad signs. I'm not sure what else I can do to help him out. I think I'm going to run home and check on him at lunch. I'll only have a few minutes with him but it's better than nothing.
Coenobita Curiosities offering crabby decor
https://www.etsy.com/shop/CoenobitaCuriosities
Top
Post Reply
163 posts