This is the place to post if you have questions and aren't sure where to ask them! If it relates to one of the sections below, please post there instead.
Post Reply
3 posts • Page 1 of 1

I have a 40g breeder with (now) 7 PP...5 med, 1 small and 1 teeny. I currently have 4 under, presumably molting. Before the majority of them were under, they were tunneling like crazy. There are tunnels everywhere in my tank...to the point I was running out of flat spots to put their food dishes, haha. I’ve never touched a single one so as not to collapse any in case of a molter, but I know they most likely aren’t in the same spot where they dug down. What are the guidelines on how to manage the tunnels while I’ve got molters underground? It’s a little concerning bc they’ve dug under some of their heavy decor and both pools...so these things are not fully supported and last thing I want is for one of them to topple over, especially a pool!

Also, I’ve been wanting to switch out my 2nd level materials for something bigger and better and spruce up the tank a bit. I’ve currently got a missing teeny (separate post) and again, the 4 molters. Is it a bad idea to try to do this now? And let’s just say all of my crabs are up and I can confidently mess with the sub. My OCD wants to stir all the sub and create a nice, smooth surface again. I know it won’t last, lol. Would this be stressful for the crabs..to not have the tunnels that they’ve dug? Or do the tunnels come and go and the crabs could care less bc they’ll just make new ones? Might be silly questions, but I consider myself a newbie still and all I can picture is this this elaborate maze of tunnels they use underground and I feel like I’d wreck their world to stir it all up, haha.

Here’s an example of how they’ve dug under one of their pools... 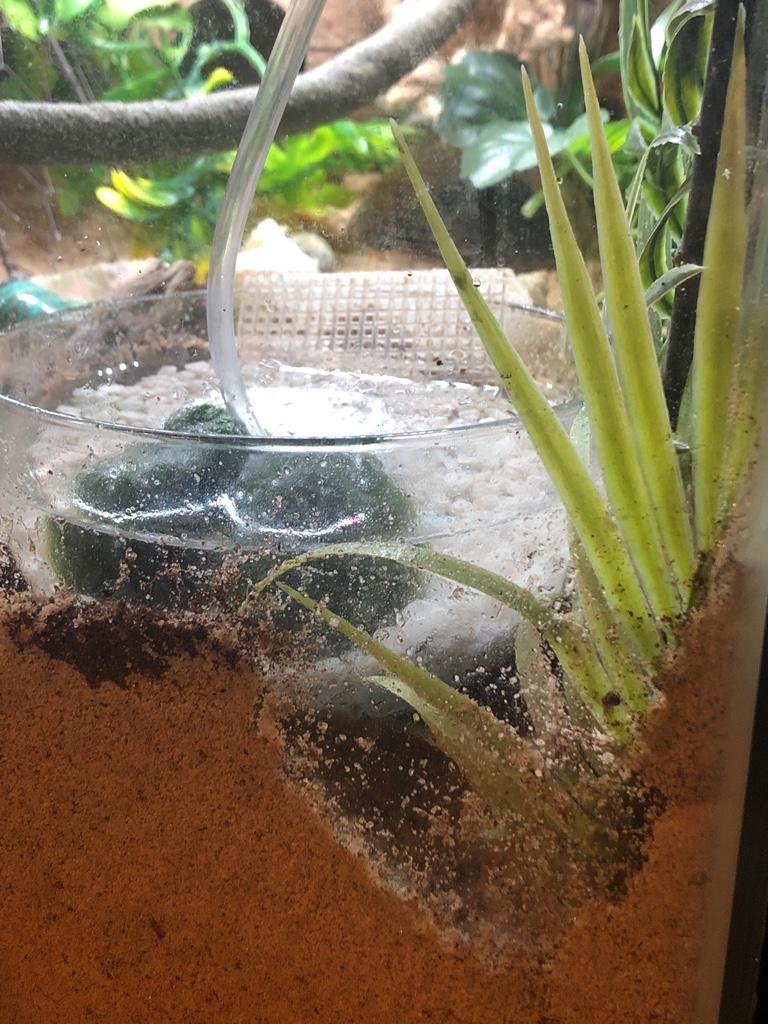 Re: Guidelines on tunnels

I've only ever had a single crab reuse a burrow, once. It takes a ton of work to actually empty out and create reusable open spaces underground. They would have to carry out the sand, push it to the side, go back for another load, etc. I never thought they could actually do this, but I watched my Ruggie do just that for a period of over three weeks. She molted, and dug right through it again after she came up, so obviously not a permanent thing.

If you are seeing craters and not big piles of sand nearby, then they are backfilling as they dig and the next time they go down they are doing the exact same thing. Over and over.

You can definitely smooth out the surface as they make a mess and move on to the next spot. Just don't pack it down when you do. You may want to do this when they start messing with the water bowls to keep from running into trouble. Might also want to start considering an upgrade, as this much activity can be a sign of them being bored and crowded, and molters may not be able to get far enough away from the others.

If you have molters down, the surface can be messed with, but buried items cannot. Not unless you have an iso to move accidental uncovered crabs to. Without knowing where they are, and with their predilection for wanting to bury near and under solid objects for protection, you're likely to find them if you go to pop sunken decor out.
Want to see all my crazy pets? @waywardwaifs on Instagram
Top

Re: Guidelines on tunnels

Thank you so much for all of this! It’s in line with what I was thinking. Not going to mess with any big or sunken stuff and just going to lightly smooth the surface out for now. I want to add new and improved decor/levels/pools/hides so bad, lol!!

I’m hoping they only dug all these tunnels when they were getting prepped for their molts and finding their spot...bc before that, they didn’t really do it that much. Based on the care sheet for tank size vs number and size of crabs, I should be good, right?

5 med, 1 small, 1 teeny, all PPs...in 40g breeder with 2 levels? Oh, and it was only the 5 mediums when all the tunnels were created...I didn’t add the small and teeny until everyone else was under, haha.